2893 years ago, on this very day, i.e. on the 10th day of the second half of the Paush month, Lord Parshwanath was born in Bhelupur (Varanasi) to King Ashwasen and Queen Vamadevi of Varanasi bringing peace, tranquility and happiness to the three worlds.

Home to many Jain temples, the temple town of Varanasi is situated on the banks of River Ganga and is considered to be of very sacred importance for the Hindus as well as Jains. In addition to 4 Kalyanaks (Chyawan, Janm, Diksha and Kevalgyan) of Lord Parshwanath in the Bhelupur area of Varanasi, the town also holds significance for the same 4 Kalyanaks of Lord Suparshwanath in Bhadaini area. Therefore, on the occasion of Lord Parshwanath'a Janma Kalyanak let us visit the three most prominent tirth's in the town.

Of the 80 ghats dotting the banks of River Ganges, Bhadaini Tirth is situated on the Bhadaini Ghat (also known as Jain Ghat) of Varanasi. This is the very place where 4 Kalyanaks of Lord Suparshwanath Bhagwan took place. This serene and tranquil tirth is situated on the banks of River Ganga can be visited either by the river or by the road. The slow murmuring sound of Ganga, adds superb music to the peaceful atmosphere prevailing here giving one a feeling that the river too joins you as a devotee chanting the name of the divine. A half kilometer walk from the main road inside deep narrow by-lanes is a heritage walk altogether. The best time to visit this tirth is just before sunrise as one can see the first rays of the sun falling upon Lord Suparshwanath's idol making the entire rangmandap glimmer with divinity.

The Ramghat area of Varanasi is home to many Shikharbandhi Jain temples, most of them now closed due to lack of management. Till date many idols dating back to hundreds of years gather dust within these temples which remain locked throughout the year. One of the largest functional temple in Ramghat is the Chintamani Parshwanath Jinalay which stands on the place where Lord Parshwanath had given a sermon to Kamath tapas.

Legend states that one day Lord Parshwanath (then prince) saw groups of men and women, carrying items for worship.His attendants informed him that some mendicant named Kamath is doing a harsh penance named Panchagni Tap (five fire penance). The citizens are going to pay homage to him with all these presents. When the lord came near the mendicant he saw that some logs of wood were burning all around the mendicant. Inside one of the logs was a pair of serpents, writhing in pain due to the intense heat of the burning flames. Moved by a feeling of compassion the prince said to the mendicant, "Burning a five sensed being in fire, what sort of self improvement do you strive for?" The mendicant replied angrily, "Prince! You are a child; go and enjoy your princely games. It is mendicants like me who know about religion not you. How can you claim that some being is burning in the fire around me?" All the efforts to persuade him that a pair of serpents was burning in the fire went in vain. Lord Parshwanath then ordered his attendants to draw the specific log aside and split it. As soon as the attendants did that, a pair of serpents, partially scorched, fell on the ground writhing in pain. Realizing that they were about to die, lord Parshwanath said to them that they should not be annoyed with the ignorant mendicant and should remain equanimous during the last moments of their lives. He also recited the Namokar Mantra. As a result of equanimous thoughts and hearing the Namokar Mantra, after death the pair was born as the king and queen of the demi-gods in the Nag Kumar clan (Dharanendra and Padmavati).

Today, an idol of Lord Parshwanath atop Padmavati Devi has been installed on the same spot where this incident took place. A very beautiful marble plaque carving showcasing the wedding of Lord Neminatha also adorns this tirth. Many idols dating back to the times of Emperor Samprati have been installed in this temple. A unique granite and marble plaque containing idols of 76 Jain Tirthankaras (24: Current Chovisi, 24: Past Chovisi, 24: Future Chovisi and 4 Sashwat Jin) has also been installed in this temple. 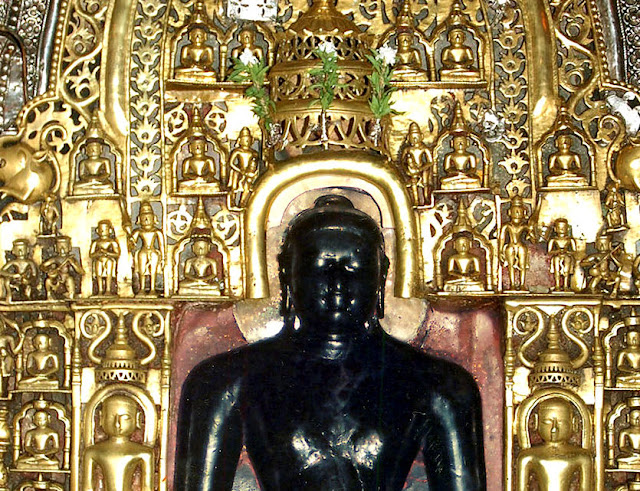 As the electric rickshaw meandered its way through the narrow by-lanes of the Rishabhdev town (Dhulev) my mind wandered off to my childhood when my grandmother was trying to make me learn the lines of the Aarti dedicated to Lord Adinath: " Dusari Aarti Din Dayala, Dhuleva mandap ma jag ajwada " Not understanding the significance then, these lines from the beautiful composition by Shri Mulchand were making me feel so ecstatic at that moment! Finally, I was on my way to the abode of lord Kesariyaji Adinath which was equated to the "Light of the world" by the poet Mulchand! How beautiful the lord must be! How divine the idol must be that the poet weaved these beautiful words with pearls of his devotion! " Teesari aarti tribhuvan deva, Sur-Nar-Indra kare tori seva !" A sudden jolt of a street bumper brought me back to the by-lanes of the dusty town dotted with jewellery shops each of whose names bear its reverence to the lord of the town –
Read more