- August 17, 2016
Located around 150 km from Ahmedabad and just 50 km from Mt. Abu lies the town of Palanpur, the abode of one of the most ancient and divine idols of Lord Parshwanath – Shri Pallaviya Parshwanath. Despite holding a special mention among the holy 108 Parshwanath Tirths, Palanpur is less frequented by pilgrims due to lack of awareness regarding the historicity and divinity of this holy tirth.


The antiquity of the temple dates back to more than 800 years and is noted for its intricate marble carvings similar to Dilwara temples of Mt. Abu. Earlier known as “Prahaldanpur Patan”, the city of Palanpur was founded by Emperor Prahaladan Dev of the Paramar dynasty in the 13th century.


Once, to please his subjects, the emperor ransacked a 4 tonne Panch-Dhaatu statue (a statue made from an alloy of 5 holy metals- gold, silver, copper, brass and zinc) from the Jain temple of Mt. Abu and melted the same to make a large idol of Nandi (bull- Shiva’s mount) for the Achaleshwar Mahadev temple in Achalgarh. Shortly after installing the Nandi, the emperor started suffering from leprosy which could not be cured despite the best efforts of renowned vaidyas (medicine practitioners) from across the kingdom.


Witnessing the emperor writhing in pain, the royal practitioners shifted the emperor to a forest where he could be treated by some medicinal herbs. For months, the treatment continued with no signs of recovery. Dejected, the king decided to stop the treatment and return back to his kingdom to die in peace. On the way back, the royal entourage happened to meet a Jain Acharya, Shri Shalibhadra Surishwarji Maharaja. Seeking a last recourse, the emperor decided to consult the Acharya for a cure. The revered Acharya, through his profound knowledge stated that the leprosy was a punishment for melting the divine idol of lord and the only way Prahladan could atone for his sins was by building a temple dedicated to Lord Parshwanath.

On the instructions of the revered Acharya, the emperor constructed a grand temple in the new city of Prahladanpur Patan and installed the divine idol of Lord Parshwanath in the holy presence of Acharya Kakkasurisvarji in Vikram Samvat 1274. After the Anjanshalakha Mahotsav, the king applied the Navhan (holy water after ceremoniously bathing the idol) on his body and got cured of leprosy. Witnessing the divine miracle, the lord came to be known as "Prahladan Parshwanath" which in contemporary times, became "Pallaviya Parshwanath". Converting to Jainism, the emperor dedicated many literary works to Lord Parshwanath, of which "Parshwa Parakram Vyasang" is the most well known.


In subsequent times Palanpur came to be known as a haven for Jains. Wave after wave of invaders swept down attracted by the wealth and propserity of the region. In 1572 the Mughal emperor Akbar himself conquered Gujarat, and Palanpur became a part of the Mughal empire. Akbar gave a foster sister in marriage to a Nawab of the Kingdom of Jhalore in Rajasthan, and as a wedding gift gave the Nawab, the territory of Palanpur. The Jains found patronage under the Nawabs and their relationship evolved into one of mutual interest, and respect. In Palanpur, the Jains became key advisors to the Nawabs.


Years of neglect and repeated attacks led to the dilapidation of the temple. However, in 2007, the renovation of the temple was initiated by the sangh and after 8 years of hard-work, the holy idol of Lord Pallaviya Parshwanath was re-installed in 2015 in an intricately carved marble Jinalay resembling the temples of Mt. Abu & Ranakpur. With all the pratimaji's (idols) dating back to the era of Emperor Samprati, the temple is a treasure trove of rich Jain heritage and architecture. Apart from pilgrims, the temple attracts devotees from nearby towns daily as the locals deeply revere the lord.


On entering the temple one can just gape at the huge Sabha Mandap laced with intricate carvings. The dome of the Sabha Mandap is embellished with an inverted lotus flanked by idols of 16 Vidya Devi's. The inner portion of the temple houses 3 Rang-Mandap's (with equally attractive domes), the main "Garbha-Griha" (Sanctum Sanctorum) in the center flanked by four smaller Gabharas (smaller chambers) on the right, left and on the eastern and western Rang-Mandap's of the temple. Huge pratimaji's dating back to more than 2,500 years are housed within each of the smaller gabharas. There are many smaller shrines in the circumference surrounding the main temple.The idol of mulnayak Shri Pallaviya Parshwanath Bhagwan is carved out of marble in the padmasan mudra (cross legged posture) and is around 45 cm in height. Till this day positive vibrations can be felt by just a sparsh (touch) of the divine idol.

The temple is very unique for the fact that all the pratimaji's inside the "Garbha-Griha" are dedicated to Lord Parshwanath. Also, in one of the Gabhara's, all the idols are dedicated to Lord Neminath. A living testimony to Prahladan’s faith stands today in the form of a statue of the emperor in a corner of the temple- the only surviving idol of the founder of the city. On the right hand side of the entrance to the Sabha Mandap beautiful marble idols of Vijay Sheth and Vijaya Shethani known for their Akhand-Brahmacharya (life-long celibacy) have been installed. 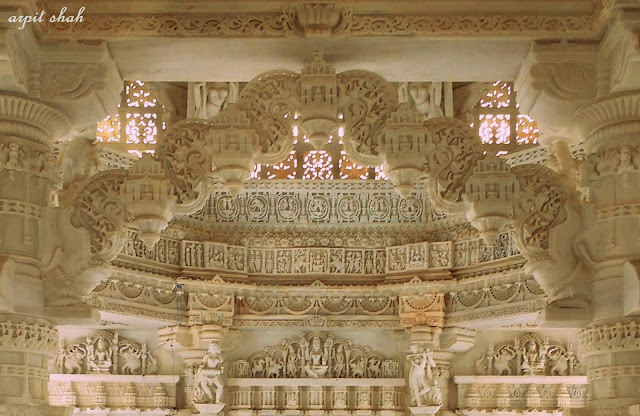