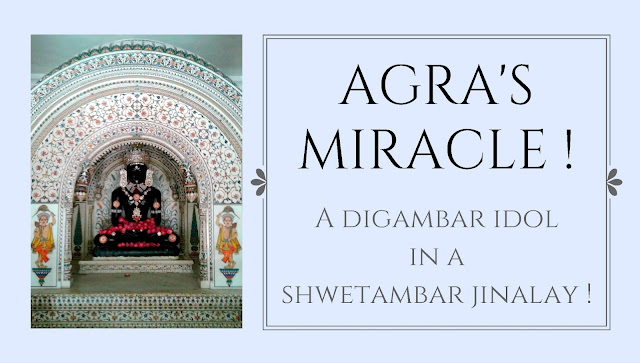 At a time when the entire Jain community remains divided in sub-sects viz. Shwetambar's, Digambar's, Terapanthi's etc.; at a time when large disputes have occurred between these communities regarding ownership of ancient idols like Antrikshji and Keshariyaji) a rare picture of harmony can be witnessed in the ancient city of Agra where a beautiful idol of Shri Shitalnath Bhagwan (probably having Digambar origins) can be found installed in a Shwetambar Temple. This unique temple, situated in the bustling Roshan Mohalla was built centuries ago in the reign of the Mughal emperor Akbar and is dedicated to Shri Chintamani Parshwanath Bhagwan. Read on to know more about this divine wonder.

Antiquity of the Temple

Once when the Mughal Emperor, Akbar saw a procession in the honor of Champa shravika’s (a Jain lay woman) six month fast, he was greatly intrigued at this feat and asked the royal servants to welcome her to his palace. From his ministers he came to know that after Lord Mahavir, it was Champa shravika who had performed such a rare penance. Akbar was astonished at the fact that one could survive without food for a continuous period of six months; since he knew too well as to how extremely difficult it was to observe ‘Roza’ for a month despite the permission for a meal every night.  The shravika explained to the Emperor that such a difficult ‘tapasya’ (penance) was possible only because of the blessings of  her revered guru Acharya Shri Hirvijay Surishwarji Maharaja (“Acharya Shri”).

This event created a great reverence in Akbar’s mind for Jainism and in order to gain more knowledge about the religion, he humbly invited Acharya Shri to his capital, Fatehpur Sikri and Agra. At that time, Acharya Shri was in the town of Gandhar in Gujarat and believing that there was an opportunity to spread the message of Jainism in the court of the Mughal Empire, he started the journey towards the capital. After an arduous ‘vihaar’ of nearly 1,100 km on foot, Acharya Shri and his disciples reached the capital in Vikram Samvat 1639 (~1582 AD).

On reaching the palace, Acharya Shri was given a grand welcome by the Emperor. Akbar, along with his three princes descended from their thrones and paid their respects. In honour of arrival of such a learned guru, expensive carpets were laid out in the royal palace but Acharya Shri refused to walk on them as such an act might kill the insects moving under the cloth. Akbar immediately ordered the carpets to be removed and found out that there were innumerable ants underneath the carpets.  Akbar was deeply moved witnessing such compassion towards the tiniest of creatures.

In the next few months, Acharya Shri gave regular discourses to Akbar on principles of Jainism, which influenced his thinking a lot. Acharya Shri persuaded the emperor to abolish the Jiziya (a tax on pilgrimages like Shatrunjay, Girnar, Taranga, Kesariyaji, Abu, Rajgruhi, Sammed Shikharji etc) and free the birds & animals caged in his menagerie. Akbar gave up hunting and abstained from meat-eating on majority of days. He also declared firman’s (orders) banning the killing of animals during Paryushan and on Mahavir Janma Kalyanak. The emperor was so impressed by Acharya Shri that he conferred upon him the title of "Jagad Guru" (“the Teacher of the world.")


Subsequently, Acharya Shri stayed in Agra to propagate Jainism and inspired many affluent noblemen and merchants to construct a grand jinalay in the bustling Kinari Bazar near the Agra Fort which was situated on the banks of the Yamuna river. Preparations of constructing a grand temple were initiated and craftsmen from various parts of the empire were called upon to design the temple. The idol of the Mulnayak (main deity) Shri Chintamani Parshwanath Bhagwan was carved out from a single rock of a rare gemstone Yashab (Jade). In ~1583 AD, the Anjanshalakha & Pratishtha Mahotsav was conducted in the midst of grand celebrations under the holy presence of Acharya Shri.

Adjacent to the Garbha Griha (Sanctum Sanctorum) of the temple, a divine (probably Digambar) idol of Shri Shitalnath Bhagwan carved out of Kasauti Patthar (Touch stone- used to test the purity of gold) was installed in 1648 AD on a marble throne brilliantly inlaid with Pietra-Dura work (Parchin-Kari) which has more intricate designs than those inlaid on the Taj Mahal. Rare and precious gemstones like Lapis Lazuli, Onyx, White Jasper, Red Jasper, Jade, Tiger Stone, Torques, Jaisalmer stone among others were used in this inlay work.

But the question arises, why was the (probably Digambar) idol of Shri Shitalnath Bhagwan installed in a Shwetambar temple? The answer lies here~

In 1648, Akbar’s grandson, Shah Jahan initiated the construction of Jama Masjid (a mosque) near the Chintamani Parshwanath Jinalay. When the foundation of the mosque was being laid, an ancient idol of Shri Shitalnath Bhagwan was excavated during the process. The idol dated back to the Mauryan ages and surprisingly had distinct features of both the Digambar and Shwetambar traditions. However, as the idol was 'Nirvastra' (without any ornaments and clothes) the Mughals asked the Digambar community to take possession of the idol.

Eminent persons from the Digambar community tried to move the idol from the ground; hundreds of labourers were deployed, but despite numerous attempts, the idol refused to bulge. In dilemma, the authorities declared to handover the idol to anyone who could move it.

Witnessing this, one Yati maharaj (A spiritually advanced layman who has not taken the Shwetambar Diksha but follows certain rules alike a monk) came forward and after conducting proper rituals requested the Kshetrapal Dev (celestial being entrusted with the protection of a certain area) and Adhishtayak dev (celestial being dedicated to a Tirthankar) to help them in this process. After many days of ritualistic penance, the divine idol of Shri Shitalnath Bhagwan was recovered from the ground and the Yati Maharaj ceremonially installed this idol in the nearby Chintamani Parshwanath Bhagwan's Jinalay.

Till this day, the miraculous idol of Shri Shitalnath Bhagwan is deeply revered by both the Digambar and Shwetambar communities. Hundreds of devotees flock to this Jinalay daily and feel the divine calmness and tranquility just by a mere glimpse of the Lord’s idol.

It is also interesting to know that the idol is devoid of Chakshu’s as many people who tried to place have failed to do so. The idol has such divine powers that one devotee named Shrichandji (who was also entrusted to guard the temple) was cured of his blindness just by worshiping the lord! It is also believed that the Adhishtayak Dev’s fulfil the wishes of the devotees who worship this idol for a constant period of 40 days.

The Jinalay complex also houses a Gyaan Bhandar, Upashray, Dharamshala and Bhojanshala and can be reached from the Agra fort railway station which is just a 5 minute walk from the temple. Further, the idol of Shri Shitalnath Bhagwan installed in the famous Badridas Temple in Kolkata was also obtained from the an underground vault below the temple.

The co-ordinates of the temple are as below ~