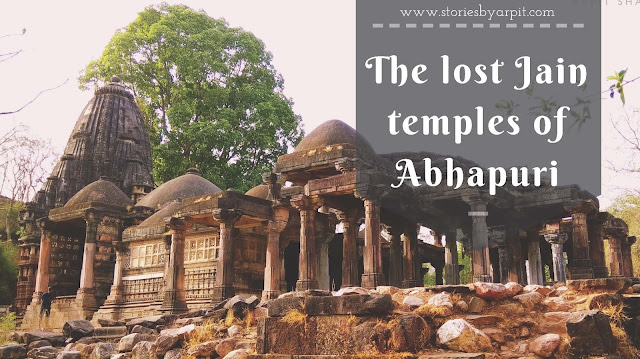 The year was 1955. A Charipalit Sangh (pilgrimage carried out on foot) initiated by Sanghpati Shri Fatehchand Motichand Vakharia was on its way back to the town of Himmatnagar (in Gujarat) after completing a 28-day arduous journey to the shrine of Lord Kesariyaji (Adinath) situated in the Dhulev town of Mewar (now Rajasthan).  Param Pujya Acharyadev Shrimad Vijay Dharmasurishwarji Maharaja led the Sangh consisting of nearly 50 Sadhu-Sadhvijis (monks & nuns) and 200 pilgrims along with a substantial support staff among others.

Just a few days away from its final destination, the Sangh camped on the outskirts of a forest couple of kilometers from the town of Idar, on a sunny day in March. Huge tents were erected at the spot and a grand feast was prepared not only for the pilgrims but also for the local villagers and Bhils (tribals) living in the nearby forests.

A grand Snatra Puja (ritual recreating the birth celebration of lord) was being conducted at the makeshift temple, when hundreds of Bhils arrived at the venue. Unknown with the rituals, they curiously watched the entire proceedings with their entire focus transfixed on the idol of the lord. As soon as the Snatra puja ended, the Bhils rushed to inform the revered Acharya something that they had seen and had left them bewildered.

In his broken Hindi, the leader of the tribe bowed before the revered Acharya and conveyed that, deep within their jungles, there were many ruined Jain temples and idols similar to the idol on which the Snatra Puja was conducted. Enthused with this information, Acharyashri decided to visit the forest and asked the Bhils to show him the temples. However, the Sanghpati along with other volunteers requested Acharyashri not to venture into the dangerous forests as they feared that it would be infested with wild animals as well as venomous snakes. Further, the volunteers also  tried to reason with Acharyashri that the Bhils should not be trusted as they may have planned to rob everyone on the pretext of showing the idols.

Ignoring all the warnings, Acharyashri ordered the Sanghpati to make the necessary arrangements as he was sure that the Bhils did not have any malafide intentions. Along with Sanghpati Shri Fatehchand and a handful of support staff, Acharyashri ventured deep into the forest following the Bhils without any fear. After hours of walking, Acharyashri’s feet were tired but his heart was eager to witness the idols. At around 5 PM in the evening, the entire batch led by the Bhils reached a clearing, on the banks of Harnav river when the Bhils announced that the temples were nearby. In the horizon of the glimmering orange sky, Acharyashri saw clusters of temples at a distance! As his heart leaped with joy, the entourage moved towards the largest temple.

Known as the “Lakha Mandir” by the Bhils, the beautiful temple was situated in the midst of Aravalli range amidst overgrown dense shrubs. While the main Shikhar (spire) of the temple was intact, the dome of the Nritya-Mandap (outer chamber) was completely destroyed. Acharyashri’s heart was shattered as he saw that mostly all the idols had been destroyed and those which were less damaged had been plastered with cow dung cakes by tribal women!  In the fading light, Acharyashri studied each of the idols and identified five less damaged ones, including the towering 51-inch idol of Lord Adinath which was the Mulnayak (main deity) of the Lakha Mandir. After visiting all the nearby temples as well, Acharyashri requested the Sanghpati to carry the five identified idols back with them as he feared that if left in the forest, these idols would either fall into wrong hands of robbers or the Archaeological survey would take them into their custody.

The next morning Sanghpati Shri Fatehchandji and his team of went back to the Lakha Mandir and rewarded each of the Bhils handsomely. The Bhils and the support staff took hours to carefully dismantle the less damaged idols and placed them in a vehicle. In the dead of the night at around 2 AM, the entourage along with 5 divine idols, left the ruins and reached the town of Himmatnagar before dawn. The idols were placed in a house in the outskirts of the town where the cleaning process was initiated and the damaged parts were restored with a solution made of freshwater pearls and marble powder.

After 6 days, when the entire Charipalit Sangh reached Himmatnagar, the idols were carried to the main temple amidst great fanfare. A ritual of 18 Abhishek was conducted under the presence of Acharyashri to restart the puja of the lord. Later, Acharyashri studied each of the idols in detail and pondered over each of the inscriptions that were carved on them which revealed that 3 of the idols (51” Mulnayak idol of Lord Adinath; 37” idols of Lord Sumtinath and Lord Shantinath ) were installed by Acharya Shri Hemvimal Suri of the Tapagaccha sect of Jainism in the year of 1495 AD. The other two idols (45” idol of Lord Adinath and 41” idol of Lord Shantinath) were installed by Acharya Shri Somsundar Suri in 1440 AD. On detailed study of the temples and the region, it was discovered that the temples were once a part of the lost city of Abhapuri city settled by Chand Raja who was cured of his curse at Suraj Kund on the Shatrunjay hill. Presently, under the guidance of Acharyashri Rajratna Surishwarji Maharaja (disciple of Acharyashri Dharmasurishwarji Maharaja) the Himmatnagar Sangh is planning to reinstall the recovered idols in a new temple on the Himmatnagar Highaway.


This ancient city of Abhapuri was built around the river Harnav, an ancient water body spoken of in the Puranas. Now known as the "Polo Forest", it is believed to have been established in the 10th century by the Parihar kings of Idar, and was then conquered in the 15th century by the Rathod Rajputs of Marwar. The name is derived from pol, the Marwari word for "gate," signifying its status as a gateway between Gujarat and Rajasthan. Built between Kalaliyo in the east, the highest peak in the area, and Mamrehchi in the west, the land is considered sacred by the local Bhils. Together they block sunlight for most of the day, which might provide an explanation for the otherwise mysterious abandonment of the ancient city. Apart from the Jain temples, which are renowned for their exquisite architecture, there are shrines dedicated to Shiva as well. There is a Vireshwar temple, where the roots of a Banyan tree provide water since ages.

Further, the forest is home to 450 species of plants, 275 species of birds, 30 species of mammals and 32 species of reptiles. In its dense canopies lurk bears, leopards, hyenas, flying squirrels and other elusive animals. The tribals who still reside in the forest are descendants of those Bhils who had helped Maharana Pratap during his refuge. In recent times, Gujarati movies like Reva have been also shot at these temples.

However, a question arises: How did a fully functional city with splendid temples, gardens and architecture be ruined and lost in the passage of time? Blockage of sunshine? Foreign invasions? Only time can tell the true story. Till then we can just marvel at the beautiful ruins embellished with intricate carvings that lie gathering dust in the mystery of abandonment and decay.

How to reach:
Polo forest can be reached within 3 hours from Ahmedabad. One can drive down NH8 from Ahmedabad to Idar (110km) and then take NH 76A for the last 38 km to Polo Forest. The forest is 60km from Himmatnagar and 25km from the town of Idar.

Liked this blogpost? Now Download this entire blogpost as a magazine in an easy to read and share PDF format by clicking here.