The beauty of Wilderness 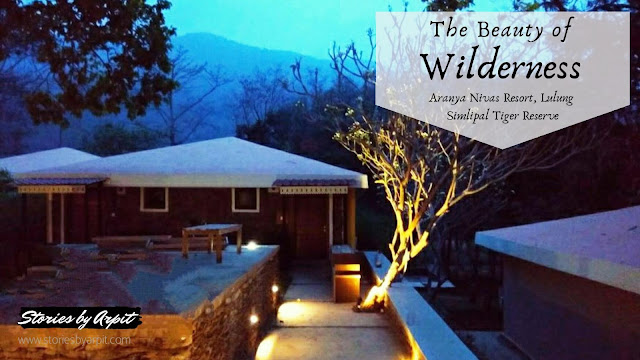 
On my bucket list since long, my wish to visit the underrated Simlipal Tiger Reserve & National Park was finally fulfilled last weekend as my original plan of visiting the Vidharbh region during the Puja vacations was foiled due to non-confirmation of train tickets. After extensively googling the web-space for planning the itinerary and finalizing the available options for our stay there, we zeroed in on a gorgeous resort tucked away deep inside the National park – Aranya Nivas, Lulung.


Known for its abundance of Semul (red silk cotton) trees, Simlipal forest is located in the Mayurbhanj district of Odisha, around 250 km from Kolkata. The National park boasts of beautiful waterfalls like Sitakund, Joranda & Barehipani and is home to 1,000+ species of plants (including nearly 100 species of orchids), 40+ species of mammals (including Royal Bengal tigers, leopards, wild elephants, gaurs, Antelope etc), ~ 250 species of birds and 30 species of reptiles.


Despite being well aware that the core area and the forest safaris were off-limits until November, we were sure that Simlipal still had many secrets in store for us. With the chants of Chandipath in the air, we began the journey from Kolkata at 4:30 AM on the day of Mahalaya. Passing through farmlands, small villages, rivulets and beautiful Kashphool fields, we made a brief halt at Kolaghat (72 km from Kolkata) for breakfast post, which we drove nonstop to reach Baripada (220 km) by 11 AM. Due to our dietary restrictions, we stopped at the only pure vegetarian joint available in Baripada - Shri Balaji Hotel (situated in Meher colony) for lunch.


Post lunch, we drove southwards towards Pithabata (19 km from Baripada) which was the entry point of Simlipal forest (the other being Joshipur). After nearly 30 minutes, we entered the forest, after which our mobile networks disappeared. After a further 10-minute drive, we reached the majestic Sitakund falls tucked deep within the forest which originates from Kalipahad hill at a height of 2500 ft. After being welcomed by a swarm of beautiful colorful butterflies, we headed towards the three-layered waterfall, which apart from its natural beauty, is also of religious significance to Hindus and local tribes.


The topmost layer of the fall is known as Ramkund, the middle being Lakshmankund and the lower being the Sitakund. A natural cave temple dedicated to Maa Banadurga, is also located on the base of the waterfall. After spending some quality time at the waterfall we headed towards the Pithabata gateway which was the entry point of Simlipal. After completing the entry formalities at the forest gate, we drove (and even off-roaded) 8 kilometers deep within the eastern side of Simlipal forest, to reach Lulung- Aranya Nivas Resort at 2 PM.


The Resort is located inside Lulung, a quaint little village on the banks of the gurgling Palpala River. Flooded with raw natural beauty, Aranya Nivas is located at an altitude of 300 meters, commanding a bewitchingly beautiful view of the hillocks in the distance. With River view rooms, Meadow Suites and Family Cottages, Aranya Nivas Resort was converted from a Government run forest lodge to a luxurious resort with all modern amenities nearly a year ago. After checking in, the courteous staff of the resort were kind enough to show us the beautiful resort. With a restaurant, swimming pool, banquet, library, jogging track, open-air gym, cycling trail, kids’ zone, golf court, badminton court, volleyball court, nursery and various gardens, the sprawling luxurious resort is one of its kind situated in the middle of the forest.


With no cellular network or other distractions, we spent some quality time at the resort chilling in the pool, swinging on hammocks, watching huge spiders make (extra-large) intricate webs, chasing cute dogs, getting drenched in the rain, gorging on mouth-watering delicacies, cycling, playing some indoor & outdoor games and of-course sharing stories with each other. Watching the hills covered in clouds, hearing the intense gurgles of Palpala river, feeling the dew soaked flora, breathing the fresh misty air and the occasional bird calls were a treat for us city dwellers. Although, we did miss out on star gazing and bonfire due to non-stop pitter patter by the rain gods. The chef was also kind enough to prepare a Jain meal for dinner and the breakfast spread (the next morning) was also amazing. There is also an in-house garden which supplies organic veggies to the kitchen adding to the taste.

The 23 hours spent at the resort were so endearing that time flew in a jiffy. The resort manager, Mr. Christopher, made sure that all our requests were addressed and our stay was utmost comfortable. This was obvious on all our faces as none of us wanted to check out and head back to the city, the next day. As the forest was closed, we missed out on visiting a lot of places inside the core area; however, the entire resort was enchanting that we did not feel the difference. Apart from forest safaris, nearby places like Barehipani falls, Joranda falls, Mugger Crocodile Park, Chahala, and Khiching can be covered in a 3 day tour. After checking out at 1 PM, the staff gifted us locally produced honey as a souvenir apart from the wonderful moments spent there. Our drive back home followed the same route – with a stop at Shri Balaji Restaurant (Baripada) for a late lunch enabling us to reach Kolkata by around 9 PM.


How to reach – Aranya Nivas Resort, Lulung is nearly 250 km from Kolkata. It can be reached by taking NH16 (Howrah- Bagnan-Kolaghat-Kharagpur-Pheko-Gopiballapur-Baripada-Lulung). To travel via train, one has to either take a late night train to Baripada (30 km from the resort) or an early morning train to Balasore (82 km from the resort). From both these places, local cabs have to be hired to reach the forest.


Tip: Prefer to stay in the River view cottages as they are well designed and maintained compared to the Meadow suites and Family cottages. Also the river can only be viewed properly from Rooms 104-106 (others are covered by dense foliage).  Also do check out the Library of the resort which has some amazing books not only on wildlife but also specific books dedicated to the flora and fauna of Simlipal.