If you are the rain laden cloud, I am the peacock eagerly anticipating your arrival…
You are my Krishna and I am your ‘Radha’ waiting with endless love in my heart…
If you are the beautiful lotus, I am the bee, awaiting to absorb the nectar of your blessings...
If you are the tree, make me the bird, so that I can always be around you !
Oh my dear lord , I yearn for you ! Please don’t keep me away from you !

27th June 2014: The flight to Ahmedabad was about to take off...and my excitement was very difficult to hide. After ages my dreams were coming true...the dream to be near to my lord was about to be fulfilled ! The destination was so far...yet the moment was so near as well! Notwithstanding a brief stopover at Ahmedabad, we reached Shankheshwar by midnight...the wait till morning seemed endless !

Ready in our puja clothes, our feet could not stop until we reached the jinalay at the crack of the dawn. Even though it was dark, the flickering lights of the diyas welcomed us to the temple. One special fragrance is bound to greet all in tirths like Shankheshwar and Shatrunjay- the fragnance of Marvo leaves, gulaab , beli and rajnigandha wafts through the air lending a feeling of purity !

The moment had arrived...just a few steps away and I would be able to witness the divinity that had eluded me since years! A series of stairs led us to the ‘Rangmandap’ and even if I try my best it would be impossible to explain the divinity I had witnessed that moment.

Just as a flicker of light is enough to cut through darkness, one sight of the supreme was enough to melt the darkness inside. The light of the gleaming diyas reflected on the golden varakh aangi embellished with diamonds could not empower the purity that I could see on the idol of the divine lord. Like a parched traveler finds an oasis in the dusty desert, it felt like all my misery had finally ended…all my desires had been fulfilled… 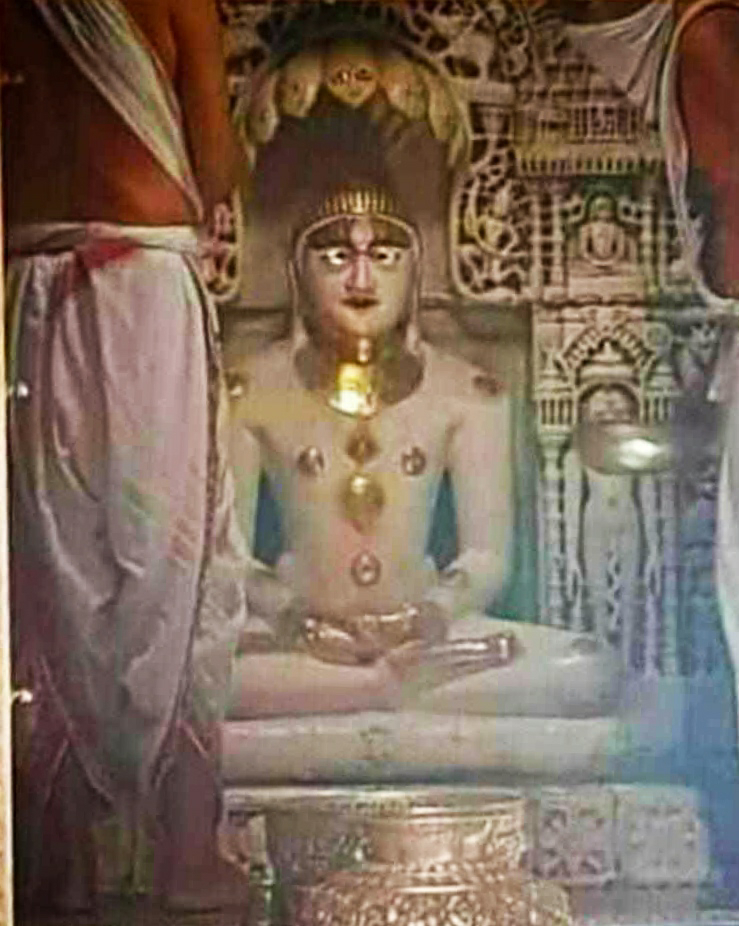 Even though, countless people were already present in that unearthly hour to perform vasakshep puja, I could only stand there to continue witnessing the aura of the lord. After singing countless hymns, when the darkness began to recede and rays of sunlight creaked in through the 52 jinalays, I made my way towards the “Garbha Gruh” (Sanctum Sanctorum) , I could feel the vibrations…yes I was finally there ! A faint ‘sparsh’ of Shankheshwar dada, even on the golden khobra …once , twice, thrice…I continued performing the vasakshep puja giving me joy that grew in leaps and bounds!


Joining hundreds of devotees, we sung countless hymns in praise of the lord ! Hundreds of voices merged in a single tone, words in unison…the moment became magical ! With tears of happiness in their eyes, the devotees immersed themselves completely !

In a short while we joined the line for keshar puja duly awaiting our turn when the ‘Chadava’ for various pujas started. Being a common person, one could only dream about taking the chaadavas at Shatrunjay and Shankheshwar!

The chadava for pakshal puja had started….5,004 mann (one mann= 5 rupees)…12,000 mann, 20,007 mann…it continued till 27,000 mann (1.35 lac!). Second came the chadava for Baras puja. I don't know what happened ,..what motivated me.. but I stood up from the line and went towards the pujari, shouting the chadhava… 3,006 mann…I cut him short and directly bid 6,003 mann! As luck would favor..which I still cannot believe…we got the chadhava!!! Awestruck completely… our joys knew no limits ! The pujari duly handed us 5 tokens for Baras puja – but we were only three of us!

Again, destiny had favored us to such an extent that we were blessed to meet a masakshaman tapaswi…on his 28th day of fast and his son !! We humbly requested them to join us on the Baras puja and they obliged!

Immediately after Pakshal puja, witnessing the lord in ultimate form, without aangi was so blissful! As I was nearing dada, I was unable to believe the moment. The first thing I did was to fall on the feet of the dada. The vibrations felt made me burst into tears and I could just murmur the stuti..

The baras puja was so special, so enchanting, the feeling so unique, so miraculous that I could not feel the idol anymore…It was dada adorning the throne. The conflicts of the soul eased like a storm brewing in the ocean was calmed. The time spent inside felt really short, but more surprises were reserved in store for us. 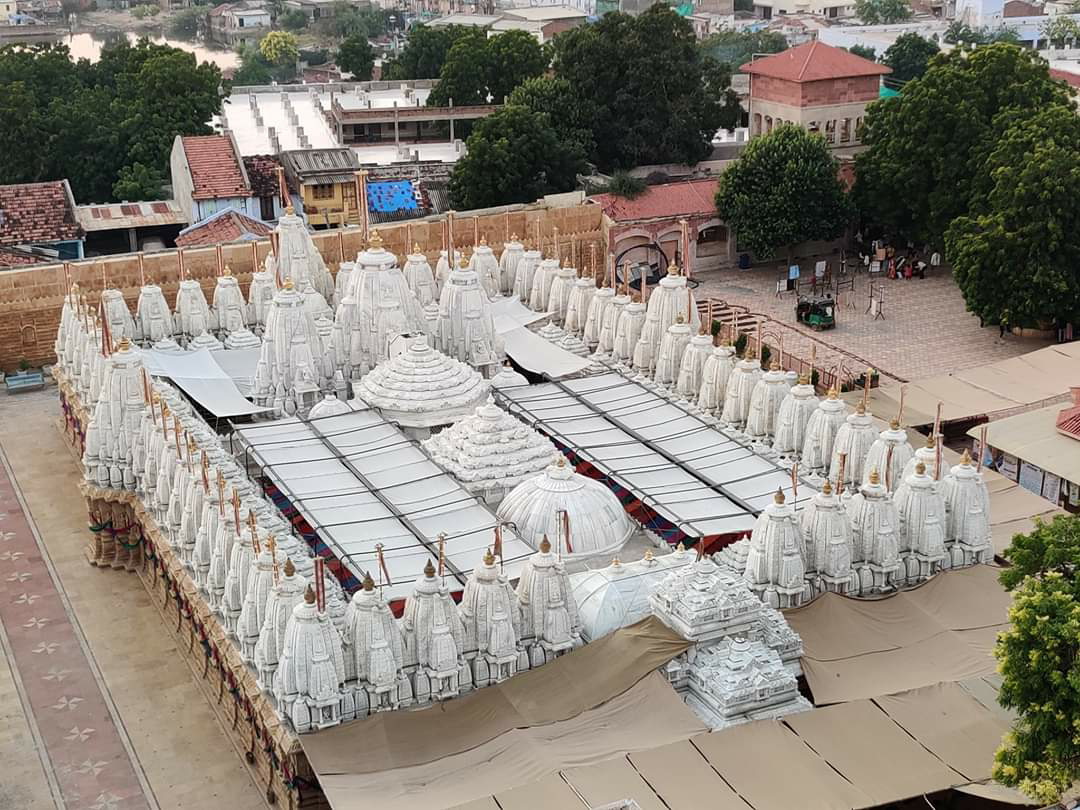 After all the labharthi’s completed their respective chadhavas, we were called in again to perform keshar puja, on prabhus pratimaji’s, without aangi ! After completing the keshar puja, the masakshaman tapaswi brought along with him countless baskets…each containing hundreds of roses, lotuses, marvo leaves, rajnigandha flowers, mogra flowers, garlands of beli, roses and marvvo leaves !!

With countless emotions, we showered thousands and thousands of these blessed flowers on the lap of the lord ! Each flower representing the pure feelings of the tapaswi towards the supreme ! Such reverence was unheard-unseen- and being a part of such magical moment was so spiritually divine that we felt like Indra Devs blessed with an opportunity to shower our emotions on the ruler of the three worlds!! The magic continued and we lost track of the outside world !

After all the magic, I just had one request to the lord – 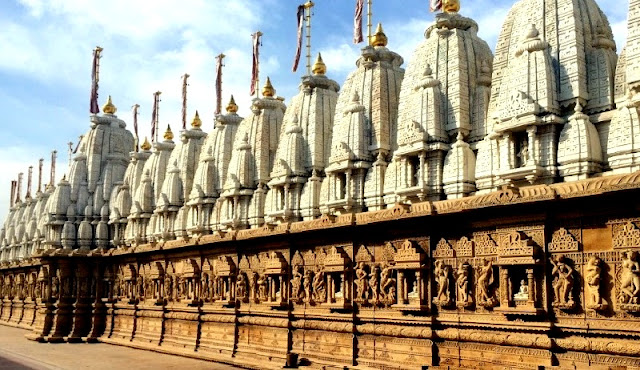