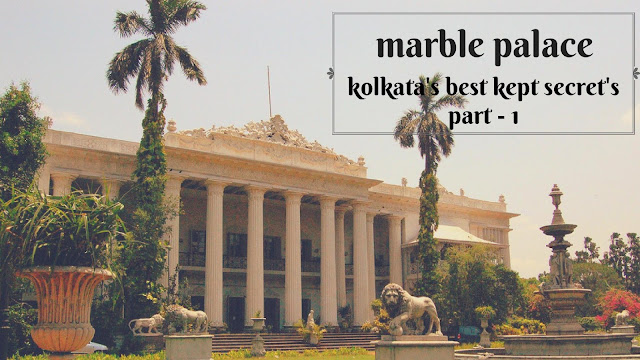 But the fact is that this city holds much more treasures built before such marvels. This is what inspired me to pen this series through which I would try to explore some of these hidden secrets that the city beholds!

First on the list is a grand palatial mansion situated in the bustling area of Burrabazar- The Marble Palace! Situated in a narrow lane known as Muktaram Babu Street in Burrabazar’s Chorbagan, the Marble Palace is one of the most beautiful palatial houses that represent the grandeur and extravagance of the city in the early 19th Century.

Built in 1850 by an extremely affluent Bengali businessman named Rai Bahadoor Raja Rajendra Mullick, the mansion is widely known because of its marble wall-panels and floors - made exclusively from 126 types of marble imported from various corners of the world. Originally named as "Nilmani Niketan", the palace has been popularly known as the "Marble Palace".  While a part of the palace has been converted into a museum, the descendants of Raja Rajendra Mullick reside on the other part of the palace.

Built with a mix of Neoclassical and Bengali styles, the three-storied building has tall, imposing Corinthian pillars, ornamented verandas and sloping roofs, built in the style of a Chinese pavilion. Known worldwide for its collection of prized paintings and rare antiques collected through a span of three generations, the palace compound also includes a garden with lawns, a lake and the first private zoo in India.

The palace retains its old world charm right from its entrance – from the gatekeeper who still protects the palace with a spear to the lush overgrown gardens that stretch away from the main covered entrance, once designed to receive horse-drawn carriages. The lawn is scattered with marble statues of lions in various positions - some keeping vigil and some fast asleep. The broad stairs that lead into the mansion are now used during private functions and ceremonies while the visitors are allowed to enter the house through the western entrance from where one can obtain the services of guides.

Simply put, the palace is enormous, spread over a nearly 8 acre land in the heart of the city. It almost feels like stepping back in a different era altogether. The trust set up by Raja Rajendra Mullick looks after the management of the palace and its upkeep.

Further, the trust is engaged in various philanthropic activities, including the daily "Bhojan" which feeds around 400 underprivileged people since 1825!!! The palace lawns are also opened for the Rath Yatra Mela on 2 days of the year (on the day of the Rath Yatra and on the day of the Ulto-Rath) wherein the underprivileged, set up joyrides and stalls to sell their wares. In another philanthropic gesture, the trust also encourages art students from reputed Fine arts schools to study the paintings and sculptures to promote the development of art.

Being a private residence, the palace trust does not wish to open its doors for leisure tourism and only invites serious art connoisseurs to experience the beauty of the palace.

In order to visit the palace, a permit has to be obtained 24 hours in advance from the West Bengal Tourism Information Bureau at Embassy House, Shakespeare Sarani (Theater Road), Kolkata. Further, a copy of Passport / ID Proof needs to be submitted at the entrance for security purposes.

Located at 46, Muktaram Babu Street, the palace is just a few steps away from Ram Mandir (CR Avenue) and M.G. Road Metro Station. The palace is open on all days (except Mondays and Thursdays) from 10 AM in the morning to 3:30 PM in the evening.

Photography is strictly prohibited within the premises and the palace guides/ guards accompany all the visitors to prevent any photography. Further, the trust strictly disallows any commercial usage of the Palace compound.

(Note: All the images used in this blog post have been sourced from the internet)