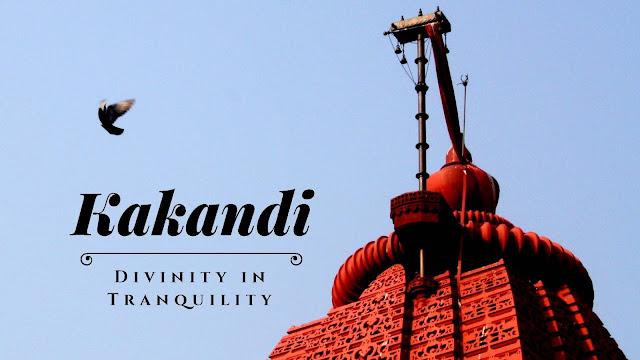 As the Tata Magic carrying me and my fellow passengers sped through the State Highway 18, deep purple skies surrendered to the advancing column of sun rays illuminating the fields as well as providing some warmth to our bodies in the foggy winter morning. Birds chirped away creating a beautiful melody in the background while the rows of Palmyra trees dotting the highway shone as if they were wearing golden crowns. Crossing the gurgling waters of Kiul river amidst such serene surroundings, I wished time would pause.

I was on my way to the Kakandi tirth situated in the Kakan village of Bihar which the Shwetambar Jains believe to be the birthplace (and the land of 3 other Kalyanaks - Inception, Consecration and Omniscience) of the 9th Tirthankar, Shri Suvidhinath Bhagwan. Originally derived from the word ‘Vihar’ the name of the state Bihar signifies the wandering land of spiritual ascetics of sramanic traditions like Jainism, Buddhism and Ajivika’s. The dusty roads of Bihar that were once blessed by the footsteps of Lord Suvidhinath, Lord Vasupujya Swami and Lord Mahavir still retain the divine aura even after a considerable passage of time.

After crossing a short distance (which felt way too long due to the pathetic condition of the roads) a rustic metal board notified the way through a kuccha road (dirt-track) which led towards the tirth. The road meandered through thatched mud huts that bore no trace of modern civilization. While the villagers were least bothered and carried on with their morning routine, the kids grew excited and ran towards our vehicle in expectation of some treats. Escaping from their near ‘gherao’ (encirclement) the driver made a quick exit and led us to the temple.

Cradled amidst unpolluted idyllic rural settings, the “Suvidhinath Prāsād” (the temple dedicated to Shri Suvidhinath Bhagwan) felt like the best place to be in, if one wanted to escape the maddening urban life and feel closer to the divine. In the absence of basic amenities like electricity and telephone network, I felt that one could surely find inner peace in the tranquil lap of nature.

A few decades back, only a small shrine containing the footprints of Lord Suvidhinath and an ancient statue of Lord Parshwanath was present in this village. However, a virtuous Jain merchant from Calcutta, Shri Kanhaiyalalji Vaid undertook great efforts and constructed a grand temple and installed an idol of Shri Suvidhinath Bhagwan as Mulnayak of the Jinalay whose Anjanshalakha (installation of soul) ceremony was conducted by Acharyashri Bhuvanbhanu Surishwarji Maharaja in 1978.

The ancient idol of Shri Parshwanath Bhagwan seated on a platform of snakes (along with Yaksh & Yakshini) is beautifully carved in black stone dates back to the 15th century. The ancient footprints of Lord Suvidhinath dating back to the similar period along with the idol of Parshwanath were reinstalled next to the Mulnayak prabhu’s idol. The temple is beautifully carved out in red stone and the ceiling of the Rang-mandap (central hall) is exquisitely carved making it one of the best artistic examples in the temple architecture of that region.

The sad part is that despite such surreal surroundings and divine aura, people do not like to stay in this tirth due to lack of amenities and fear of theft. Another problem that the region faces is acute poverty of the villagers due to which the infrastructure is extremely poor making it difficult for pilgrims to reach this place. However, I believe that this lack of development is the only reason why the land has still retained the positive aura of the divine.

Kakandi Tirth is situated in a village named Kakan which is situated around 125 kms from Patna and the nearest Rail head is Jamui (20km) and Kiul (19km) from where private vehicles are available. Government buses also reach Kakan village, but the frequency is very less. The tirth is also situated near the birthplace of Lord Mahavir, Shri Kshatriyakund Tirth.