The Sultan of Sultans! 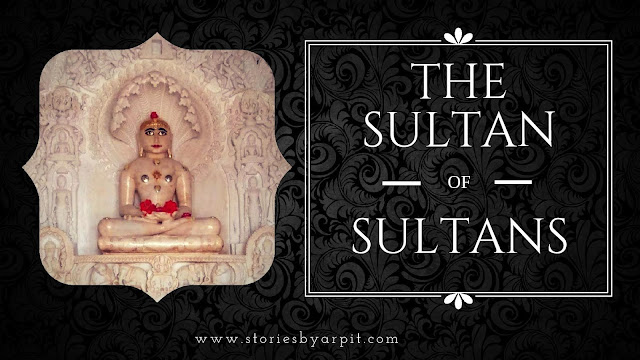 Once on my way to Palanpur, I came across a signboard on the Mehsana Palanpur Highway displaying the route to a very unique and uncommon name for a Jain temple named Shri Siddhidayak Sultan Parshwanath Tirth ! Why would lord Parshwanath be associated with a title given to a Turkic ruler? Surprised and curious to know more, I inquired about this signboard from the bus conductor who was astonished that I had never heard about this place before - "સુલતાન દાદા નું નામ પણ નથી સાંભળ્યું તમે?" Keen to know more, I got off at the very next stop and paid a visit to this amazing temple which recounts the tale of how Allaudin Khilji, (who had the audacity and the might to conquer large kingdoms, kill thousands of innocent lives, force hundreds of women to commit Jauhar and destroy magnificent temples like Somnath) had to bow down before the might of Lord's divinity ~

The year was 1299. After conquering various kingdoms of Ranthambore and Chittor in the Rajputana, Delhi’s Sultan, Alauddin Khilji was on his way to attack Anhilwad Patan, the capital of Gujarat with a cavalry of 14,000 and infantry of 20,000. Plundering the towns and temples along the way (as Khilji was against idol worship), the Sultan’s convoy reached Siddhpur, a major city of Gujarat situated on the bank of river Sarasvati established by Raja Siddharaj Jaysinh.

Witnessing the grandeur of the wealthy city, the army started ransacking the monuments and grand temples, wherein they came across a group of Bhojak’s (devotional singers) protecting an ancient temple dedicated to Shri Parshwanath Bhagwan. When the army generals came to know that it was a Jain temple constructed by Siddharaj’s minister, Alingdev in the 11th century, they decided to destroy the temple completely (to prove their loyalty to Khilji, as he hated idolatry). The Bhojak’s begged with folded hands to stop the massacre and leave the temple. Despite repeated prayers, when the general’s army did not stop destructing the temple, some devotees rushed to Allaudin Khilji and requested him not to destroy the idol of Lord Parshwanath as it was not merely a stone idol but the lord himself. The Sultan, full of arrogance and pride ordered the devotees to show the proof of divinity or else witness the destruction of the idol.

The Bhojak’s finding no other solution, agreed to go through the test of their faith and requested the Sultan to visit the temple in the evening. As Khilji arrived inside the remains of the temple ruined by its army, the Bhojak’s placed 99 unlit lamps filled with ghee in front of the lord and prayed humbly. After offering their respects to the lord, they started singing a devotional hymn in Raag Deepak with their emotions and sentiments deeply emerging from their ālāp. As the musical notes of the veena, tanpura and bansuri ventured between the āroh avroh, vādi and samvādi of the Raag, the cool breeze blowing suddenly turned considerably warmer and the temperature became stiflingly hot. Beads of perspiration appeared on the Khilji’s forehead as the Bhojak’s continued to sing steeped in a trance. As the composition reached its peak, Khilji suddenly saw a flash of light in the midst of complete darkness as one lamp lit by itself! The Sultan’s eyes grew wide with amazement as all the 99 lamps started burning one by one.


However, still not convinced by the divinity of the idol, Khilji believed the incident as a part of the singing prowess of the Bhojak’s and decided to destroy the idol to satisfy his ego. As he pulled his sword from its sheath, a hooded cobra appeared out of nowhere and did not allow Khilji to take a step ahead. Despite repeated attempts to move forward, the Sultan could not move an inch as if the cobra had trapped him in an invisible cage. Realising his mistake, Khilji bowed down before the lord and repented for his sins and announced in his deep baritone – This lord is the Sultan of the Sultans! Since then, this divine idol has been named as Sultan Parshwanath.


Since that incident, the idol of Sultan Parshwanath was moved to an upper floor of Shri Mahavir Swami Jinalay situated in Siddhpur. In subsequent centuries, and many revered Acharya’s wrote about the divinity of the idol in their memoirs and this tirth was also included in the list of 108 illustrious pilgrimages of Lord Parshwanath. However, as years went by Siddhpur’s economic significance declined and the Jains migrated to other flourishing centers like Palanpur and Patan leading to a severe shortfall of caretakers of the holy shrine. The temple became dilapidated and was in need of some serious repairs. Also, many pilgrims travelling to Palanpur and Mt. Abu did not wish to venture deep into the interiors of the Sidhpur village reducing the footfalls further.


Witnessing the decline of such a pious spiritual centre, Acharya Shri Rajendra Surishwarji Maharaja advised the temple trust to construct a grand temple fit for the Lord which could be located on the main highway so as to ensure accessibility. After years of hard-work, the idol of Shri Sultan Parshwanath along with the other idols were re-installed in a grand temple located on the National Highway in the outskirts of Sidhpur on 29th November 2017 under the guidance of Acharya Vijay Rajshekhar Surishwarji Maharaja and Shravak-ratna Shri Kumarpal V. Shah.

The new tirth can be reached via Private vehicles and State Buses which ply on regular intervals from Ahmedabad . Dharamshala and Bhojanshala facilities are also available. The co-ordinates are as under-