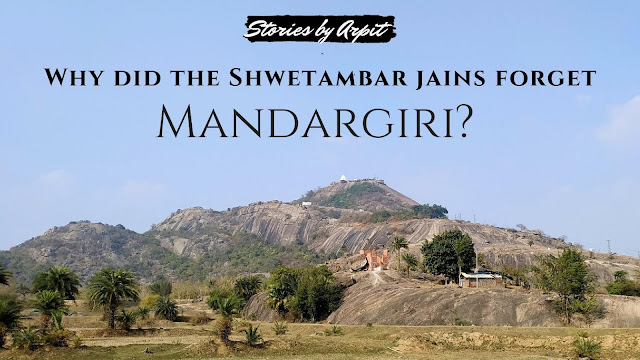 While researching upon the forgotten “Vihar Bhumi’s” of Lord Mahavir (places where Lord Mahavir traveled during his lifetime), I came across a hill named “Mandargiri”. What fascinated me was the fact that this hill that was the actual place where the 12th Tirthankar, Shri Vasupujya Swami attained Nirvan / Moksh (salvation). As I had always read that Champapuri tirth (situated in Champanagar village, Bihar) was the place where all the 5 Kalyanak’s of Vasupujya Swami took place, this bit of information was absolutely new for me. Therefore, I decided to pen this article in a Q & A format to uncover the facts properly.

How old is the Champa city? What are the scriptural evidences that show that all the 5 Kalyanaks of Lord Vasupujya Swami took place here?

It is believed that the first Tirthankar, Lord Adinath had divided the country into 52 Janapadas (kingdoms) and one such Janapada was known as Ang whose capital was Champa. This fact is also corroborated from Mahabharata, wherein it is mentioned that Karna ruled the kingdom of Ang Desh from Champa. Ancient Jain Agams (5th Century BC- 3rd Century AD) and scriptures like Paryushanakalp and Tirthavakalik Prakirnak (~5th Century AD) state that all 5 Kalyanaks of Lord Vasupujya Swami took place at Champa.


Where is the site of the ancient Champa City located currently?

Champanagar village situated in the Bhagalpur district of Bihar has been identified as the site of the ancient city of Champa. The village is situated nearly 6 km from Bhagalpur Railway station. While Champanagar bears little traces of its past glory, it does house magnificent Jain temples constructed to mark the Kalyanaks of the Shri Vasupujya Swami.


If Champanagar has been identified as the site of ancient Champa, how can one say that Lord Vasupujya swami attained Nirvan at Mandargiri Hill?

Today, the village of Champanagar extends barely a few kilometers. However, as it has been known from historical evidences that Champa was a very large and prosperous city in ancient times, its territory would have extended much more than the local limits of Champanagar village. Mandargiri Parvat, also known as Mandar Hill is a small mountain situated in Banka district under Bhagalpur division of state of Bihar. It lies approximately 55 km south of the Champanagar village. Following evidences support the fact that Lord Vasupujya Swami attained Nirvan at Mandargiri-
Thus, we can understand from these facts that Mandargiri was the actual Nirvan bhumi of Lord Vasupujya. Therefore, it can also be understood that the area limits of the ancient Champa city extended significantly more than the current Champanagar village, including Mandargiri hill within its territory as well.

If the hill is the Nirvan bhumi of Lord Vasupujya, then why did the Shwetambar Jains forget Mandargiri?

As mentioned by Shri Saubhagyavijayji Maharaja in the 18th Century, very few Shwetambar Jains made pilgrimage to Mandargiri. As the temples in Champanagar housed all the symbolic shrines of the 5 Kalyanaks, Shwetambar Jains started making their offerings there and eventually reduced their visits to Mandargiri. Later, Digambar Jains, who visited Mandargiri hill in greater numbers (than Shwetambars) constructed temples atop the hill. As Digambar presence increased in the hill, Shwetambar Acharya’s did not propagate the antiquity and relevance of this tirth, thereby leading to alienation by Shwetambar pilgrims. Currently, Shri Mandargiri Digambar Jain Siddhakshetra committee takes care of the ancient footprints of Lord Vasupujya Swami.

Although the Digambar scriptures mention that 3 Kalyanaks of Vasupujya Swami took place in Mandargiri, (i.e. Diksha, Kevalgyan and Moksh), the Shwetambar scriptures only mention the hill to be the Nirvan bhumi of the Lord. Today, both the Shwetambar and Digambar temples situated in Champanagar have symbolic shrines representing all the 5 Kalyanaks of Lord Vasupujya Swami in their respective places of worship. However, based on the available archaeological and epigraphic evidence it can be understood that the Shwetambar Jain temple of Champanagar has been built on the spot where the Kevalgyan Kalyanak (Omniscience/ enlightenment) of Lord Vasupujya Swami took place. Four ancient Shilalekhs, i.e. inscriptions found from the temple premises support this fact. The Digambar Jain temples of Champanagar house 2,000 year ancient footprints of Lord Vasupujya swami indicating the location of other Kalyanaks.

How can a pilgrimage be made to Mandargiri?

After reaching the base of Mandar hill, one has to trek for around 30-40 minutes to reach the peak. Steps have been constructed in only half of the hill and the balance has to be hiked on slippery rocky slopes making it very difficult to climb. Doli’s (palanquins) are available for aged pilgrims. The top-most point of the hill houses two Digambar temples which preserve the ancient 3,000-year-old footprints of Lord Vasupujya Swami marking the Nirvan bhumi. A marble idol of Vasupujya Swami in Padmasan position and Kausagg mudra have been installed by the Digambars. There is also one shrine marking the Kevalgyan bhumi and a small cave marking the Diksha bhumi of the Lord.


Apart from Jains, do other communities also revere this hill?

Apart from Jain presence, the hill has many references in Hindu mythology. As per references found from Puranas and Mahabharata, this hill was used for churning the ocean to extract the nectar from its bosom (Samudra Manthan). There is, adjacent to this hill, a pond called "Paapharni" which is believed to wash off all the sins of devotees. In the middle of the pond is a temple dedicated to Vishnu and Laxmi. Many rare sculptures of Shiva, Narasimha, Kamdhenu, Sarasvati and Varaah, dating back to 11-12th century AD, can be found to be scattered around the Mandargiri Hill. Despite its historical importance, neither the Archaeological Survey of India nor the state archaeology department has declared the hills a protected site. Currently, the Bihar Government is constructing a ropeway for developing this as a tourist destination.

Mandargiri is a 700 ft high hill located approximately 55 km south of Champanagar off Bausi, a place located on the state highway between Bhagalpur and Dumka in the state of Bihar. To reach Mandargiri, one can travel via train or road from Bhagalpur. 6 seater Autos can be hired for ~Rs. 1,200/- for a two-way journey. Mandar Hill is the nearest Railway station and regular trains are also available from Bhagalpur.