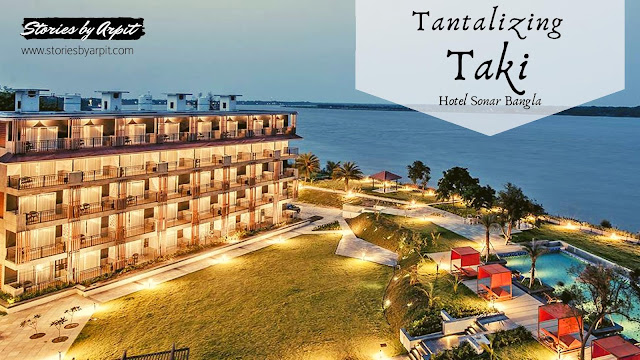 Along the riverside.
Tweeting of birds, joyously they sing.
Rushing of sediment laden fertile water,
The whistling wind speaks, the waving leaves answer.
The scent of nature. Indescribable.
Up in the sky, the eyes of baby blue.
Fluffy white clouds above greener lands,
they speak of a language we do not understand.

As the mighty Ichamati River flowed through silently, solitary boats floating on it, the cool breeze gently caressing the face, I wondered how city dwellers like us were missing out on these simple pleasures of life. Inhaling the fresh air from the lush greenery all around felt like sublime bliss and was a luxury and at the same time. On the other side of the river was Bangladesh, an invisible border dividing both the countries. I was experiencing this bliss at Hotel Sonar Bangla, a bewitchingly beautiful resort situated in a small town named Taki, famous for its proximity to Bangladesh as well as it’s Durga Puja immersions. (The annual Durga Puja festivities are notable because of the town's position on the border with Bangladesh. Indian's and Bangladeshi's meet on the Ichamati river on boats to conduct the ritual of immersing of the idols in the water)

To make use of our Durga puja holidays, we planned a quick getaway to Taki on the days of Ashtami and Navami. We began our journey from Kolkata by taking the Basanti Highway off EM Bypass after descending the ‘Maa’ flyover. Although, Taki was just 70 kilometers from Kolkata, the scenic drive from Science City to Hotel Sonar Bangla (via Bantala-Ghatakpukur-Malancha-Golaghata) took us nearly 2.5 hours due to the innumerable speed breakers (58 to be precise) constructed on the entire stretch.


One of the unknown tourist destinations near Kolkata, Taki is a pastoral delight situated in the North 24 Parganas under the Basirhat subdvision. Taki was once the land of landlords, full of old palatial houses and lush green forests. With numerous temples, mini forests and a confluence of three rivers, Taki is emerging as a weekend getaway for many tourists from Kolkata. It is a must visit for travelers wishing to soak themselves in the aura of rural Bengal.


To tap this growing opportunity, Hotel Sonar Bangla created a state-of-the-art paradise on the outskirts of Taki (around 6km away from town) on Mansingha road, right on the banks of Ichamati River (after developing properties in Tarapith, Darjelling, Puri, Mandarmani and Kolaghat). With a blend of leisure, luxury and activity, the resort is complete with Swimming pool, Gym, play area, riverfront sitting and not to forget the amazing river-view rooms. From having endless chats by the riverside, relaxing by the pool and playing carom & cards, we created memories of a lifetime at the resort. Mr. Abhishek Roy from the resort was also very kind and courteous for guiding us during our stay.


After checking out from the resort the next day, we visited the following spots famous with tourists in Taki by hiring a Toto (Rs. 600 for 4 Pax)-

Zamindar Bari – A dilapidated mansion with remains of a bygone era. The beautiful but crumbling arches were the only survivors.

Roychowdhury House –An ancestral house of former Army General Shankar Roychowdhury. There is a Natmandir in the premises where Durga puja festivities were going on.

Golpatar Jungle– Also known as “Mini Sundarban”, this forest is a walking trail under the canopy of trees and mangrove roots (which hold the soil together). It owes its name from the Golpatar tree that is abundant here in this area. Our photo ID’s were deposited by the BSF before entering, as this was an international border as well.


Eco Park & remains of Rajbari – Once a large mansion, this Rajbari is now a decay of crumbling ruins due to the rising water levels and lack of maintenance. The garish statues of eco park overlooking the river were forgettable.