Decoding the Jain Vidhi for Marriage 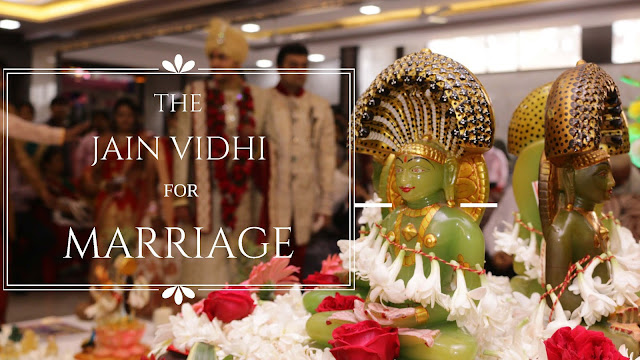 I had been bogged down by innumerable questions like these, since the day I announced that I would follow the “Jain Vivah Sanskar Vidhi” (commonly referred as “Jain-vidhi”) in my marriage. Although common for Jains residing in western regions like Gujarat, Maharashtra and Rajasthan, people here in Kolkata were very apprehensive regarding “Jain-vidhi” for marriage. While a section of people accepted ignorance and were curious to know more, another section strongly dispelled it stating that there could be no religious texts supporting the “Jain-vidhi” of marriage, as a religion strictly opposing any worldly desires cannot advocate such rituals.

Therefore, to dispel certain myths and to answer WHY all Jains should follow these rituals, I decided to pen this note in a Q&A format. I will also try to give a brief overview on the rituals that form a part of this vidhi in this post.

Q1. What is the “Jain-vidhi” for Marriage?

To answer this question, we have to go back to the time of Lord Adinath when humans were completely dependent on Kalpavruksh (“wish-fulfilling trees”) for their needs. With the passage of time gradual changes occurred and the yield from the Kalpavruksh trees reduced leading to problems, quarrels and disputes among people. To guard against these disputes and to live in peace and harmony, people formed groups headed by a “Kulkar” (A number of people collected to form a ‘Kul’ and the head of the group was called ‘Kulkar’ whose duty was to remove discord and establish order). This era of Kulkar system was known as the period of twins (Yugalik). A human couple used to give birth to a twin- one male and one female. This twin would become husband and wife on reaching adulthood. The twins used to lead a happy and contented life and died a natural death together. King Nabhi of the Ikshawaku clan was the seventh and the last in the line of Kulkars. His wife was Queen Marudeva.

Lord Adinath was born to the 7th Kulkar, King Nabhi & Queen Marudeva. When lord was crowned the king, he taught his people six main professions and 72 sciences enabling his subjects to lead a contended lifestyle. That leads us to the chapter of Lord’s marriage. The institution of marriage came into existence after he married Sunanda and Sumangala to set an example for other humans to follow. Although, Adinath Bhagwan’s twin was Sumangala, Lord also married Sunanda, when he saw that her twin had died tragically. This was the first marriage ever witnessed and the Lord himself taught the universe, the rituals to be followed in a marriage.

Kalikal Sarvagna Acharya Shri Hemchandracharya in his book Trishashtipurushshalaka Charitra mentions the details of the rituals which took place during the Lord’s marriage. Even Munishri Chirantanacharya’s work in Prakrit (translated into “Rushabh ni Shobha hu Shi Kahu”) mentions the magnificence the first wedding of the universe - of Lord Adinath.

Q2. Do we have any religious text which provides explicit details of rituals to be followed as per Jain Vidhi of Marriage?

Contemporary modifications of the marriage rituals shown by Lord Adinath were made more than 1000 years ago by Acharyashri Vardhaman Surishwarji Maharaja in the 10th Century AD in his work “Achar-Dinkar Granth”. In the granth, Acharyashri states the rituals to be followed for 16 Sanskars of Gruhast Jeevan (sacraments of life) like Garbhadhan Sanskaran Vidhi, Janmasanskar Vidhi, Naamkaran Vidhi, Adhyayan Arambh Vidhi and Vivah Sanskar Vidhi among others. The entire rituals to be followed for a wedding as per Jain beliefs find a place in the 14th section of the granth.

Q3. If the same has been mentioned in scriptures, why do some Jains oppose this vidhi?

Some sub-sects of Shwetambar Jains oppose this vidhi as they believe that materialistic rituals should not be conducted in front of Tirthankars. They are correct to some extent but they do not understand that the actual marriage rituals are not conducted in front of Tirthankar idols; only the prior pujans are conducted in front of Arihant parmatma's. The Achar Dinkar Granth does not advocate placing of Tirthankar idols during marriage. Another opposition to this vidhi from some Acharya's of Tapagacch (a sub sect) is that Acharya Vardhamansuri (who wrote Achar Dinkar) belonged to Rudrapalli Gacch and not Tapagacch so they should not be followed; However, they do not understand that this granth was written prior to the birth of Tapacgacch or Khartargacch for that matter and most of the other vidhis from this granth are accepted by all sects.

Q4. Why should anyone follow the Jain Vidhi for marriage?

Today, most of the Jains, get married in the way as Brahmin pandits show them. More than following the rituals, marriages have been converted into shows of pomp and fanfare. The entire piousness and sanctity of the rituals has been reduced to a side show and people are more interested in the glamour and various exotic foods served to them in the weddings they attend. Being Jains, it is our foremost duty to follow the teachings laid down by Tirthankar’s and revered Acharya Bhagwant’s. Making offerings to Mithyatva Devi-Devta’s creates further karma-bandh.

It is also pertinent to note that although Shwetambars have mostly stopped following the “Jain-Vidhi”, Digambar’s usually follow the Jain Vidhi in their marriages (The rituals in Digambar Jain Vidhi are somewhat different from the Shwetambar Vidhi).

Q5. How is a Jain Wedding different from a usual wedding?

The biggest tangible differences that one can notice in a Jain Wedding are that footwear is not permitted at the place of marriage and any type of fooding is not allowed during the entire process to maintain the sanctity of the rituals.

Although a majority of the rituals are similar to those of Gujarati Weddings ( Varmala, Hastamelap, 4 Fera’s etc) the difference lies in the fact that all the offerings are made to Tirthankara’s and Devi-Devtas as per Jain Cosmology and not to Hindu deities. Also, the sacred chants have been derived from Achar Dinkar Granth which makes them completely different from other weddings.

Q6. Does this mean that the wedding takes place in front of the idols of Jain Tirthankara’s and Demi-gods/ Goddesses?

Q7. Can you give an overview of the rituals that take place as per Jain Vidhi?

Further pujan’s of Ashtamatruka and Kulkar take place a few days before the wedding at the Bride’s residence and Groom’s residence respectively.

Q8. Can any Pandit conduct the rituals as per Jain Vidhi?

No. Only a Vidhikaar having a profound knowledge of Aachar Dinkar Granth can conduct a wedding as per Jain Rituals.


Q9. Are the Groom and Bride supposed to fast on the day of the Marriage?

It is always urged that a pious ritual should be accompanied by any Tapasya. Therefore the Bride and Groom should preferably do an Ayimbil followed by Paushadh on the day of their marriage. Any other Tapasya (Upwas, Ekashna, Beyashna) can be also done. However, if not possible, the Bride and groom have to atleast do Navkarshi and Choviar and practice Brahmacharya on the day of the marriage.

Q10. Can any other customary vidhi be added to the Jain Vidhi of Marriage?

Q11. Marriages are supposed to be full of fun! How is one supposed to enjoy in a marriage that’s more like a Pujan?

More than fun, it is important to begin a new chapter of life with sanctity and pious rituals. However, Jain weddings can be fun too! The rituals are very intriguing and addition of music makes the wedding magical. The onus is upon the Vidhikaar to explain the rituals so that all can remain engrossed!

Although the correct path to salvation is acceptance of "Saiyam" and leaving all worldly desires, not all of us can succeed in that.  Therefore, I wish to urge all Jains, especially the youth (who may be getting married in times to come) to follow these rituals. I also request all to share the details of this vidhi with friends and family as most of us are ignorant of the fact whether such rituals exist or not.  Further, if any of your questions on Jain Vidhi remain unanswered, please feel free to ask me by commenting on this post or by mailing me at csarpitshah@gmail.com. I will be glad to assist you in any manner possible.

At the end, I wish to thank my family, my in-laws, my wife and my friends without who's support I would not have been fortunate enough to have a "Jain-Wedding" :).

P.S. - Following are the different vidhis apart from Vivah Sanskar Vidhi specified under the granth-