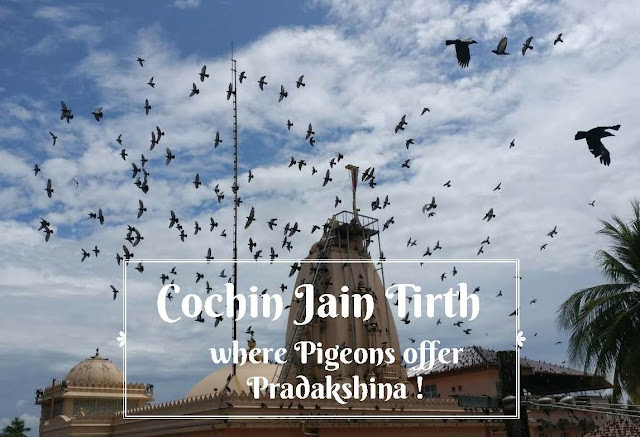 Surrounded by the exotic backwaters of Arabian Sea, lies a century old Jain tirth situated in the Mattacherry area of Kochi (Cochin) housing beautiful Jain temples which are not only renowned for their heritage but also for the hundreds of pigeons which have made this complex their home.

Jainism was spread in Kerala in the 3rd century BC soon after the Mauryan King Chandragupta along with Acharya Bhadrabahu Swami travelled to Shravanabelagola in Karnataka. Disciples of Acharya Bhadrabahu Swami journeyed further south, into present day Kerala and Tamil Nadu to spread the message of Jainism. Later, however it declined and was revived only with the rapid influx of spice traders from Kutch and Gujarat in the 19th century. As these Jain traders needed a place of worship, these temples were constructed by society stalwarts in the port city of Cochin.

The first temple dedicated to Shri Dharmanath Bhagwan was constructed by Smt. Hirubai Jivraj Dhanji in 1904 and another temple dedicated to Shri Chandraprabhu Swami was constructed by Seth Popatlal Govardhan Lalan in 1933. More additions to these temples were also made as the community expanded. The complex also houses a Sthanakwasi Upashray and a Atithi Gruh (Guest House).

The temple complex also houses a shrine dedicated to Shri Shantinath Bhagwan which is believed to be very miraculous. Legend has it that once the Jain Sangh immersed the idol in a nearby river as it had become Khandit (damaged). However, exactly after nine months the idol reappeared miraculously on the banks of the same river without any damages. The Jain sangh considering this as a pious omen carried the idol back to the temple with great fanfare, but the idol refused to enter the temple from its main gate (as it was taken out for immersion from the temple’s back gate). The sangh realising this, took the idol to the back-gate and the entry was granted immediately! Today the entire Jain community highly reveres this idol and people throng from faraway places just to catch a glimpse of the lord.

Apart from the temples and upashrays, the tirth is also famous for hundreds of pigeons which reside within the temple premises. At around 12 noon all the pigeons take three Pradakshina’s (circumambulations) of the temple and hear the manglik (sacred chants) from an elderly gentleman post which they are fed by the visitors. Many local and foreign tourists flock to this place to witness this spectacle! Watch a video here (courtesy: Mr. Saurabh Mehta)-

When in Kerala do not miss this beautiful temple which is around 42 kms from the Kochi Airport and 10kms from the Ernakulam Railway station. The co-ordinates are as below-
Shree Cochin Swetamber Murtipujak Jain Sangh
Gujarati Road, Mattancherry, Cochin - 682002,
Phone : 0484 - 2224802, 6560250
Email: info@jaintemplecochin.org
Web: www.jaintemplecochin.org