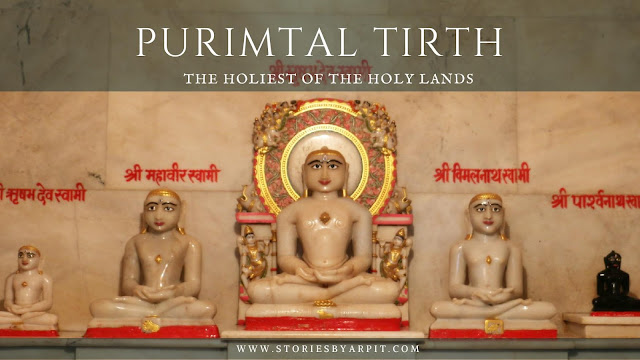 The land with so many attributes must be a revered pilgrimage like Shatrunjay, Shankheshwar, Girnar and Shikharji…Right? Perhaps no. We must’ve visited or atleast heard the names of the divine pilgrimages mentioned above, but have we heard the name of Purimtal Tirth? Perhaps no.

So, let us know more about this divine land. Known as Purimtal and Prayag in ancient times, the Tirth was home to many grand Jain temples apart from the Kevalgyan bhumi as per Vividh Tirth Kalp by Acharya Shri Jinprabh Surishwarji Maharaja in 14th century AD. Further, Acharya Shri Chirantanacharya's Rushabh ni Shobha hu shu kahu beautifully describes the event of Lord's Kevalgyan in Purimtal through the below lines-

The tree beneath which Lord Adinath attained Kevalgyan is known as ‘Akshayvat’ (Indestructibe/ immortal tree) and is revered by Hindus, Buddhists and Jains alike. Under this tree, sandalwood footprints of Lord Adinath were installed but were stolen later. Further, according to Trishashtishalakapurush Charitra, several Tirthankars after Lord Adinath have also visited this holy land. Lord Mahavir had practiced meditation in the Shakatmukh Udyan and his Samavasaran also was erected here by the demi-gods. Further, Acharya Arnikaputra also attained Kevalgyan and Moksh near the banks of Triveni Sangam.

In the 15th century Emperor Akbar renamed this city as Allahabad and constructed a massive fort on the banks of confluence of Ganga, Yamuna and Saraswati enclosing the famous Akshayvat tree. Currently, the tree located within the Patalpuri Temple at the Allahabad Fort is worshiped as the Akshayvat. However, a popular opinion is that the Patalpuri Temple tree is not the authentic Akshayvat and the real Akshayavat is in another underground temple inside the Fort. When the British gained control of the Allahabad Fort after the Treaty of Allahabad in 1765, they did not want general public to access the sensitive parts of the fort. So, the shrine was moved to fringes of the fort compound, that is, the present-day Patalpuri Temple where the local Brahmins set up the stump of the original tree. An 18th century map of the Fort from the British Library confirms this: the location of the original temple is shown in the center of the fort; while the present-day Patalpuri Temple is on the outskirts of the Fort. As the Fort is under the command of Indian Army, a permission from the Commandant of Allahabad Fort's Ordnance Depot is needed to visit this tree (except during the Kumbh Mela when the site is open to all the pilgrims).

Apart from the Akshayvat, there are 4 Digambar Jain temples and a Shwetambar Jain Temple. Also the Allahabad museum houses many beautiful Jain idols which were excavated from nearby areas.

The Shwetambar Jain temple, houses a very beautiful, ever-smiling, ancient idol of Lord Adinath dating back around 2,000 years ago. What is so amazing that during different times of the day, the idol looks different- representing childhood, youth and nirvan-avastha the Lord at different times. Apart from Mulnayak Shri Adinath Bhagwan, idols of Shri Vimalnath, Shri Parshwanath, Shri Mahavir Swami, Lord Shantinath and footprints of revered Acharya Bhagwant’s have also been installed in this temple. Currently the Jain Shwetambar Mahasabha, Uttar Pradesh manages the trust and the temple is well looked after by the caretaker and Pujari, Shri Munna. However, looking at the current state of affairs at the temple I realized that -

The tirth is situated in the city of Allahabad in Uttar Pradesh which is connected with all major Railways and Air carriers. The Shwetambar Jain temple is situated around 3 km from the Railway Station and 13 km from the Airport. Auto Rickshaw and Toto’s (electronic rickshaw) are easily available from both the Railway station and airport.

Independent, unstumbling like the wind, practicing various and manifold penances, persevering in manifold vows, Lord Adinath wandered for a thousand years (after Diksha) in various regions untouched by disturbances, enduring trials after which he arrived at Purimtal, the chief suburb of Ayodhya. To the north of it was a beautiful grove named Sakatmukh, which the Lord occupied. After fasting for four days, standing in meditation under a banyan tree, he attained the gunasthan called Apramatt. Then after ascending the Apurvakaran, he attained the first pure meditation. Then having attained Anivritti and Suksmasamparay, the Lord instantly achieved destruction of the passions. Then instantly he reached the second pure meditation, and in the next moment his delusion was destroyed. He destroyed the five knowledge-obscuring karmas, the four belief-obscuring and the five obstructive karmas the destructive karmas which remained (at that time). On the eleventh of the dark half of Falgun month, the moon being in conjunction with Uttarasadha, at dawn the Lord’s omniscience became manifest. It had the three periods of time (past, present, and future) as its sphere and made visible the entire three worlds as if held in the hand. The heavens were gracious; the winds gave comfort; a moment of ease even for hell-inhabitants was produced at that time.

On the other side, in the city of Vinita, Bharat Maharaja (Lord Adinath’s eldest son) along with Mata Marudevi (Lord’s mother) set out with horses and elephants ornamented with gold, diamonds, and rubies to greet the lord. Nearing the Samavasaran (divine three floored pavilion from where the lord gave sermons) built by the demi-gods, Marudevi Mata saw her son’s splendor accompanied by the 35 Atishay’s (supernatural powers). From the joy at that sight, she ascended the Kshapakashreni and, the eight karmas being destroyed, she attained enlightenment at once from the eighth Gunsthan. While still seated on the elephant’s shoulder, Mata Marudevi attained Moksh simultaneously with and enlightenment, becoming the first person to attain Moksh in this Avasarpini (cosmic cycle).

After listening to Lord Adinath’s first sermon, Lord’s grandson, Rushabhsen was initiated as Pundarik Gandhar (first monk) along with many others, thereby installing the first Chaturvidh Jain Sangh.