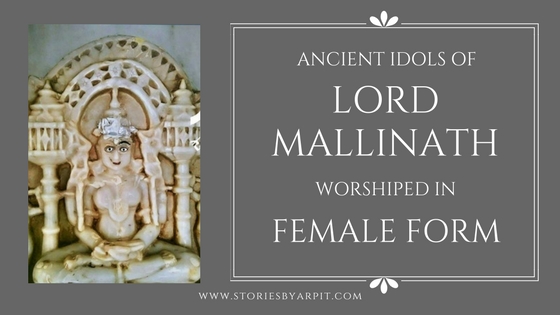 While I have always been fascinated by history, some intricacies of Jain antiquity have never failed to amaze me. One such instance where such historicity is debated is that the two major sects of Jainism – the Shwetambar’s and Digambar’s disagree on the matter whether the 19th Tirthankar, Shri Mallinath Bhagwan was a male or female. While the Shwetambar’s believe that Lord Mallinath was a female, the Digambar’s disagree on the same as they perceive that a true mendicant must renounce all property or possessions including clothes to attain Moksh (Liberation). This injunction effectively bars women from ever renouncing all "possessions" and, accordingly, from attaining Moksh. On the other hand, the Shwetambar’s have put forward various Shastras (scriptures) to claim that a female can attain Moksh and further state that a female (Lord Mallinath) becoming a Tirthankar is an Acchera / Asharya (exception/ extraordinary event) of this cosmic age.

While I do not wish to delve deep into this sectarian debate, what I wish to highlight is the fact that even though the Shwetambar’s believe that Lord Mallinath attained Moksh as a female, they do not currently worship Lord Mallinath’s image in a female form on the following grounds -

Thus as per the above logic Lord Mallinath is portrayed as male in the idols in conformity with the other Tirthankars by the Shwetambars.

My emphasis on the word 'currently' in the earlier paragraph clearly implies that although the Shwetambar community worships Lord Mallinath in a male form, the same was not the case in earlier times. I will try to give evidence on the same by listing 6 known instances (there could be more) which prove that Lord Mallinath was a female Tirthankar and was also worshiped in the female form in the ancient ages –

1. 1500-year ancient idol of Lord Mallinath excavated in 2002 – As reported in a regional newspaper – “Hindustan” (dated 4th July 2002), an idol of Lord Mallinath in standing position was excavated from Akaur Basti in the Madhubani District in Darbhanga (Bihar). This idol made of brass coloured stone measured 2 inches in length and ½ inches in breadth depicted a fully clothed image of Lord Mallinath with long braids of hair and developed breasts. As per historian, Dr. Satyanarayan Thakur (a noted professor at C.M. College, Darbhanga) the idol dates back to the 5th Century AD and signifies the presence of Shwetambar Jains in the area (as the idol is fully clothed). The reference of the same was carried out in the “Namo Titthasa” newsletter by Shri Lalit Nahata in its February 2003 edition. As per Acharya Vijayshilchandrasuri of Shwetambar sect, the discovery of this idol is very significant because it provides Archaeological evidence (apart from Scriptural evidence) that Lord Mallinath was a female.
2. Headless Idol of Lord Mallinath dating back to 7th Century in Lucknow Museum - The Provincial museum, Lucknow preserves this unique idol of Lord Mallinath in black stone sitting in Padmasan Mudra. This idol was destroyed during attacks and thus is headless. The Lanchan (symbol) shows a defaced figure of Kumbh (Pitcher). The open palm of the right hand placed in Dhyan Mudra shows a lotus-mark but there is no Sri-vats mark on the chest (see image below). However, what makes this idol very unique is that its reverse part shows hair woven in braids and the developed breasts are so prominent that it is natural to regard this idol as a female figure. As per Dr. Umakant Premanand Shah (M.A., Ph.d) although the identification of the idol as Lord Mallinath is unmistakable, it is difficult to ascertain whether this idol was Digambar or Shwetambar as no clothes have been carved on this idol.

3. Idol of Lord Mallinath at Keshavrai Patan (Bundi Dist. Rajasthan) – This large idol of Lord Mallinath dating back to 1,000 years is seated within a beautiful Parikar with the Ashtapratiharya. While this idol has both the Shwetambar and Digambar elements to it, it is unmistakably female (see image below). Although no trace of clothes can be found, Kundal’s (ear-rings) have been carved on the face. 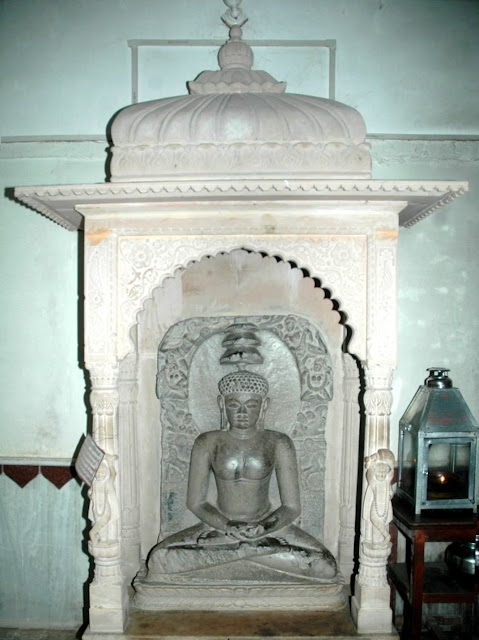 4. 1,800 year ancient idol of Lord Mallinath in Khulna Museum, Bangladesh – On 18th December 2007, the Khulna office of the Archaeology Department of Bangladesh excavated an 1,800-year-old, 7 inch long red sandstone terracotta idol of Lord Mallinath in female form with flowing hair from Damdampir in Jessore, Bangladesh (see image below). While the idol with Parikar does not bear any Lanchan, the terracotta plaque bears the name of the Tirthankhar as Lord Mallinath. It is currently kept in display at the Khulna Museum.

7. 18th Century Painting of Rishimandal yantra in Rajasthan - An eighteenth-century painting of the Shwetambar Ṛiṣhimaṇḍal yantra features a female image of Lord Mallinath standing alone in the portion of the "ī" that falls to the side of the "hr" (see image) of the 'Hrīm' rather than having both Lord Parshwanath and Lord Mallinath seated in this section of the "ī," as was common at the time. Presenting Lord Mallinath as the most prominent Tirthankar of the diagram seems to be an intentional move to distinguish this diagram from its Digambar counterparts. Looking closely, we can see that the commissioners of this painting took special care to emphasize that this standing Tirthankar is, indeed, a female Lord Mallinath as it is represented with a symbol (Kumbh), depicted below the Tirthankar (other 23 Tirthankar’s are not shown with their symbols). The Tirthankar Mallinath as represented here has a female figure, with breasts and also wears a cloth that is not typically shown on images of other 23 Tirthankar’s. Currently, this painting is owned by a private antique collector.

Further, although all images of Tirthankar’s appear similar, the ancient idol of Lord Mallinath at Bhoyani tirth (discovered 140 years ago) near Ahmedabad, Gujarat is also believed to have a female/ womanly face as specified in the tirth’s history.

At the end, based on the above instances, I would like the readers to decide whether the idols of Lord Mallinath should be installed in the female form (as per the practices followed by earlier saints) or one should stick to the current practice of depicting the lord in the male form (as per the Shwetambar logic mentioned above).

While it is not important to create a distinction between a male and female image of the lord (as one worships the soul and not the physical image), the motive of this post is only to illustrate the fact that Tirthankar Shri Mallinath Bhagwan was worshipped in feminine form in the ancient ages and not to hurt anyone's religious sentiments.