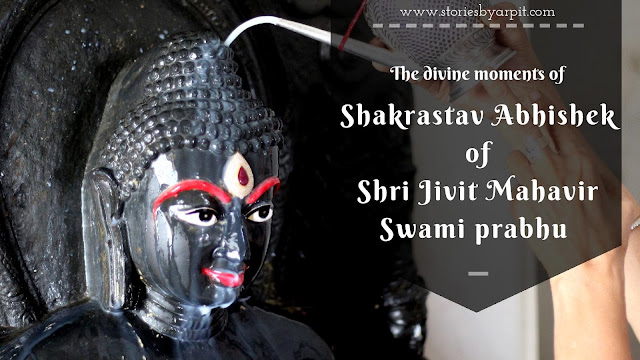 Anyone knowing me even  remotely, would be aware of my deep affection towards (1) The nearly 2,600 year ancient Jivit Swami idol of Lord Mahavir built by his brother Raja Nandivardhan situated at Lord’s birthplace, Kshatriyakund and (2) the divine Stotra - Shri Vardhaman Shakrastav. Therefore, when we got the divine opportunity to conduct Shri Vardhaman Shakrastav Abhishek on Jivit Swami, it was a dream come true.


My tryst with Kshatriyakund Tirth and the lord started years back, when I read a book named "Adi-Jin-Bimb Nirmaan Prabandh" by Acharya Shri Hemratna Surishwarji Maharaja wherein he beautifully described his divine experience with the Jivit Swami idol ; how he was captivated by the beauty of the lord that he did not realize that he was singing hymns in praise of the lord from dawn to dusk; how he did not wish to leave the temple; how he was so besotted that he could not think of anything apart from the mesmerizing idol! All the adjectives used by Acharyashri were so beautifully engraved on my mind that they gave me goosebumps every time I imagined those moments! This deep fascination continued for years but it was only in 2007 and subsequently in 2011 that I got to witness this divinity very closely when I got to conduct 18 Abhishek’s on the idol twice. Both these experiences had left such a massive imprint that I fell in love with the lord.

I was introduced to the divine Vardhaman Shakrastav Stotra by my Gurudev, Param Pujya Muniraj Shri Shilchandra vijayji Maharaja in 2012 when he encouraged me to learn it. The words, “Shakra” (Shri Shakrendra Maharaja, the ruler of 64 Indra’s of heaven) and “Stav” (Stavan, i.e. a hymn in adoration of the Lord) combine to form the name Shakrastav. The stotra is a collection of 273 Adjectives in adoration of the lord that joyously (and spontaneously) emerged from the heart of Shakrendra Maharaja when he came to know of Lord’s birth. This stotra was gifted by Shakrendra to Acharya Shri Siddhasen Divakar Surishwarji Maharaja in the 5th Century AD for the benefit of mankind. While this stotra was considered lost in the passage of time, it was rediscovered by Shri Chinubhai Ratilal Doshi from the ancient Gyan Bhandar (library) situated in Kavi Tirth, Gujarat. In recent times many revered Acharyas, finding the divine power of “Bhakti” (Devotion) through this stotra, found themselves very close to the divine lord. To recreate the divine Janma-Abhishek (birth celebrations by anointing and ritualistic bathing of the Lord at Mount Meru), Shri Vardhaman Shakrastav Abhishek’s are conducted by anointing the idol of the lord with various fragrant concoctions, precious jewelry and rare herbs.

I consider myself to be very blessed to introduce this divine Abhishek in Kolkata which gave me and our group, various opportunities to conduct Shri Vardhaman Shakrastav Abhishek’s in eastern India. Therefore, on 20th day of January 2018, when my Kalyan-Mitra and guide, Shri Girishbhai Mehta expressed his desire to conduct Shri Vardhaman Shakrastav Abhishek at Kshatriyakund, I was overjoyed! Months later, when he called me back to confirm the divine event, that too on the holy day of Lord Vardhaman Mahavir’s Chyavan Kalyanak (the day when Lord's soul entered the womb of Mata Trishala) on the divine idol of Jivit Swami, my joy knew no bounds. Under the guidance of Acharya Shri Nayvardhan Surishwarji Maharaja, the preparation started almost a month ahead of the Abhishek.

During the initial planning stages, Shri Girishbhai expressed his intense desire to leave no stone unturned, and urged us to procure the best of the best “Samagris” (ritualistic ingredients) for the Abhishek and the Aangi of the Lord. While the rare herbs were procured from Gujarat, pure sandalwood and its powder was procured from Mysore and various fragrant incenses were procured from Hyderabad, Lucknow and even Dubai. Pure fragrant oils were procured from Kannauj in Uttar Pradesh to as far as from Australia. Sacred waters of 108 holy rivers & lakes including Shetrunji (Palitana, Gujarat), Ganga (Haridwar, Uttarakhand), Mansarovar Lake (Tibet) and Gajpad Kund (Mount Girnar, Gujarat) were collected for this purpose. Abhimantrit Vasakshep (Sandalwood powder blessed through spiritual chants) from hundreds by revered Acharya’s were also received for the Abhishek. Even for decoration of the temple, it was decided to use Sugarcane stalks and mud pottery as they could be distributed to the local villagers at Kshatriyakund post the event.


On the holy day of Lord Mahavir’s Chyavan Kalyanak, i.e. on 18th July, 2018 nearly 200 devotees, including our group (Shri Munisuvrat Aradhak Group) arrived at Kalyanak Bhumi Shri Kshatiryakund Tirth to be a part of this grand celebration. At the crack of the dawn, Pujya Acharya Shri Nayvardhan Surishwarji Maharaja inspected and blessed all Samagi’s with Abhimantrit Vasakshep. On one hand, the preparation of fragrant Abhishek concoctions was initiated while on the other hand colourful Ghauli’s were prepared. Hundreds of Fal & Naivedh (fruits and sweets) and lacs of fresh flowers were procured.

As the prior preparations ended, everyone joined the Chyavan Kalyanak Rath Yatra wherein the idol of Lord Mahavir was carried on a chariot in a procession around the village amidst great fanfare. Anukampa daan was given to villagers and the local tribals performed various dances in reverence to the lord.

At around 11 AM, the divine Abhishek’s of the Lord commenced under the holy presence of Acharya Shri Nayvardhan Surishwarji Maharaja. One of Kolkata’s best singer’s, Shri Dhirenbhai Sanghvi also joined us thereby creating an even more divine atmosphere. Amidst the heavenly chants of Shri Vardhaman Shakrastav Stotra sung in various Indian Classical Ragas, following fragrant concoctions and anointment's were offered to the lord –

After the divine Abhishek’s, an Aarti consisting of 108 lamps was offered along with Mangal Deepak, Shanti Kalash and Chaityavandan. Post the celebration, the Aangi and decoration proceedings were initiated.

While the temple was decorated with lamps and mud-pots, Anthuruims, Lilies, Gerbera Daisies, Orchids, Roses and various exotic flowers were procured from various corners of India to create the floral gardens. The aangi’s were created with Golden and silver leaves creating an aura never seen before. The day ended with a serene Bhakti Bhavna conducted by me, Shri Dhiren Bhai and beautiful samvedna by Shri Harshvardhanbhai Bhayani.

I would really like to thank Shri Girishbhai Mehta and the entire Shri Mansukhlal Parmanand Mehta family for giving us a treasure of a lifetime!