The unique Jain temple of Himmatnagar 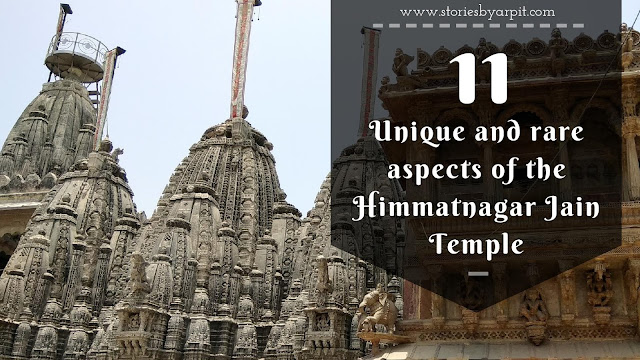 Throughout the history of mankind, humans have created a sacred space, not just to witness the glory of the lord but also as a connecting link with the divine. Humans have put aside constraints of money, effort and time to construct beautiful temples which have been built on the foundations of faith, divinity and spiritualism. A temple is not just a sacred structure but a space where an individual could imbibe the enshrined energies. Every aspect of the temple, from its architecture to its deities has been consciously designed to make this experience happen.

Similarly, Jain temples across the world have been constructed based on detailed scientific principles as laid out in traditional scriptures embedded with genuine craftsmanship. Jain temples have usually followed the scriptures known as “Shilp Shastra’s” (namely Prasadmandan, Rupmandan, Aparajita, Kshirarnava, Sutrasantan, Diparnava, Vraksharnava, Vastukautuka, Vastumandala, Vastumanjari and Vastusara) based on which they are constructed. While famous Jain temples like Delwara (Mt. Abu),  Ranakpur, Tarangaji, Shatrunjay (Palitana) have been constructed in the past by legendary sculptors, there are hundreds of Derasars across the country which are unique in their own might.

One such temple is situated in Himmatnagar town of Gujarat which is so unique that it stands out from all other Derasars. The temple, situated in the Vakhariavas – Dr. Gandhi Road, is dedicated to the 24th Tirthankar, Lord Mahavir. Although no records of the temple construction/ installation can be found, many idols date back to the 13th Century and the temple structure seems to be a cluster of 2 Jain temples that were grouped together (maybe post attacks by Allaudin Khilji). Following are the 11 unique features/attributes of the Himmatnagar Jain temple which would be rarely found elsewhere –

1. The idol of the Mulnayak Bhagwan faces the West direction instead of East

As per the principles of Shilp Shastra, the idol of the Mulnayak should face the eastern direction. However, Lord Mahavir’s idol faces the west direction.  Another unusual aspect of the temple is that while the Shikhar (spire) of Mulnayak prabhu is devoid of any carvings, the Shikhar of a subsidiary shrine dedicated to Shri Sumtinath Bhagwan has intricate carvings on it. Further, as per the principles of Shilp Shastra, the Dhwajj Dand, i.e. the flag post of the main deity of the temple, i.e. the Mulnayak should be taller than its subsidiary shrines. However, in this temple, the Dhwajj dand of the subsidiary shrine dedicated to Lord Sumtinath is taller than that of Mulnayak Prabhu’s spire!
How could this happen? While there are no definitive answers to the question, there are two assumptions–
a. It is believed that the ancient Mulnayak of the temple was Lord Sumtinath and later, on the advice of a revered Acharya, Shri Mahavir Swami’s idol was made the mulnayak.
b. Another theory states that as many shrines/ deities and temples were probably grouped together to form this single temple (post attacks by Allaudin Khilji) the Shikhar of Lord Sumtinath Bhagwan was left untouched.

The outer wall of a temple is known as the “Jagati” which is decorated with the carvings of deities of demi gods & celestial beings like Yaksha & Yakshini. However, apart from the idols of the celestial beings, the Jagati showcases of Lord Adinath with flowy hairs immersed in deep meditation, a tirthankar conducting Panchmushti Loch (customary pulling of hairs before Diksha); an idol of Bahubali immersed in meditation with creepers entangled in his legs and variohs idols of Jain monks engaged in meditation with ‘Ogho’ & 'mala' in their hands. These sculptures can rarely be found on the outside wall of a Jain temple as it is visible to the outside world and hence susceptible to Ashatana.

The outer walls also depict idols of Shri Krishna, Ganesh and Hanuman. Why were these idols placed? Again though there is not a definitive answer to that, it is perceived that the carvings of the Jagati try to tell a story which has not yet been comprehended. Although Krishna & Hanuman feature is the Jain Ramayan and Mahabharat, no links have been found to this temple. As per Jainism, Krishna in his next birth will become a future Tirthankar named Amamswami. The Jagati also depticts an idol of a King offering his respects to Sarasvati Devi , a snake charmer, an archer, a warrior etc.

4. No Mangal Murti’s in the temple

Jain temples have a unique feature not found elsewhere in the other temples – the outer wall of the temple contains 3 Mangal-murti’s (non-consecrated idols), i.e. idols of the Tirthankar on the three sides representing a Samavasaran where the Lord faces all four directions. In this temple, the Mangal Murti’s are not present; instead 3 idols of Kshetrapal Dev (celestial protecting the land) have been installed.

While these reasons remain debatable, the true motive of the sculpture has been lost with him.
6. Unique Idol of Lord Parshwanath

While there are many idols depicting Padmavati Devi with Lord Parshwanath during “Kamath Upsarg”, this temple houses one unique Panchdhatu idol of Lord Parshwanath above a standing idol of Padmavati devi whose design can rarely be seen elsewhere.

The ‘Jagati’ of the temple is lined with sculptures of various animals that resemble monkeys. Interestingly, all of the monkeys seem to be eating something (a fruit perhaps). Now the question arises what message did the sculptor want to convey through these many eating monkeys? That secret seems to have gone with the sculptor himself.

When the lost city of Abhapuri was accidentally discovered by Acharya Shri Dharmasurishwarji Maharaja and Seth Fatehchand Motichand Vakharia in the year 1955, they found various ruins of Jain temples and idols in the forested area which is now known as Polo Forests. The revered Acharya Shri advised the Seth to carry five idols from those temples back with them (which were less damaged) as he feared that if left in the forest, these idols would either fall into wrong hands of robbers or the Archaeological survey would take them into their custody (Read the full story here). These idols were ceremoniously installed in this temple and till date people throng to this temple to have a glimpse of the divine ancient idols.

10. Un-stealable idol made of Sphatik

The temple houses a beautiful idol of Lord Adinath (which was brought from a Gruh  Jinalay in the vicinity) carved out of a precious stone named Sphatik (Quartz Crystal). Due to its precious value, this idol was stolen thrice, only to be returned everytime by the thieves who stole it.
11. Idols of Shravak-Shravika engaged in a Samayik

The archways of two of the smaller shrines on the roof of the temple depict a Shravak (Jain Layman) and a Shravika (Jain Laywoman) engaged in Samayik (vow of periodic concentration) in front of Sthapanacharya. Such images can rarely be seen elsewhere in a Jain temple.

While all these attributes make the temple very unique, its serene environment and a spiritual atmosphere also make this temple stand out. This temple is currently under renovation under the guidance of Shri Kumarpalbhai V Shah and it will soon be restored back to its original glory.

I would like to thank Shri Mihirbhai Vakharia for taking me to this temple and providing valuable insights for this blog post!